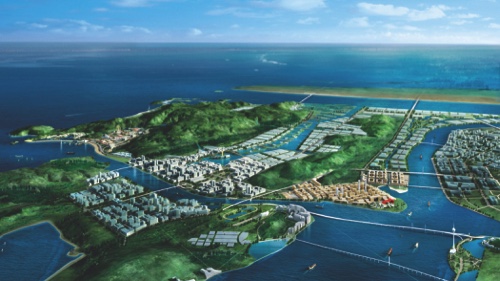 An artist’s projection of the planned Hengqin residential development

Over the last month, the pre-sale of apartments planned in Hengqin have been gaining in popularity. According to a local sale proxy, more than two hundred flats slated for developement have sold out within three weeks through his agency.
“About 70 to 80 percent of buyers are local residents, and most of them are young people below the age of 30,” said the real estate agent. From downtown Macau to Old Taipa, various real estate agencies thoughout the city have posted the projected diagrams of planned upscale properties in  developing Hengqin Island in their windows.
A residential complex promoted by a Zhuhai-based property developer, the Huafa Group, has been featured in the presale listings, offering a selling price of RMB40,000 per square meter for a four bedroom apartment.
“Apartments in Macau of the same grade usually sell for MOP10 million, but a 120-square-meter flat of the Huafa project will only sell for MOP 5.5 million,” explained the proxy, “and its construction and decoration materials will be of upscale quality.”
Besides the attractive price and luxurious interior, Macau’s buyers also favor the better air quality and environment of the neighboring island. Meanwhile, the location of housing units is considered convenient for commuters, especially for those working on the Cotai Strip.
“When you can drive to Hengqin as conveniently as to Macau, of course they prefer living in Hengqin instead of the polluted and crowded Macau,” he said, adding that the future Huafa community will be a mere “five minutes’ drive from Hengqin Port.”
According to advertisements, the residential complex will take advantage of a river connected to Coloane, and will build artificial canals among the buildings. “You can drive your own boat in the river and even park it downstairs of the building you live in,” said the agent. 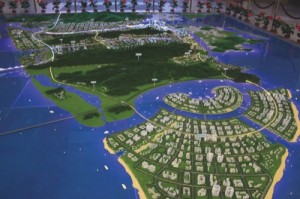 The planned Huafa complex will comprise 14 buildings accommodating over 1,400 households, providing flats ranging from 50 to 170 square meters in size. According to the agent, seven of the planned buildings have been acquired by property investors from Macau, while the rest are selling in Zhuhai.
“The flats are expected to be delivered to households in mid 2017, as now the developer has prepared to start laying the foundation,” he said. “Both the developer and the investor we delegate here have very good regulations, so we are confident that the planned apartments will be built and delivered on time with no problem.”
The agent further stressed that the complex on sale is only the first phase of the Huafa project, whose second phase will be launched in one or two years with a 20 to 30 percent increase in its presale prices.
According to the Southern Metropolis Daily, the past few years have seen only one residential property in Hengqin up for sale; but in 2014, many new commercial housing projects have mushroomed, estimated to provide approximately 20,000 housing units by 2017. At present, about ten projects are on sale, and some of the buildings have been purchased mostly by Macau residents.
However, since the presale of planned apartments is illegal under the jurisdiction of mainland China, some local agencies advise that only non-Chinese passport holders will be allowed to join the presale.
In Guangdong Province, commercial housing presale regulations stipulate that a 7-storey building cannot be put up for sale before the construction of its structure is completed, while buildings with more stories can only start selling when two thirds of the structure (at least 7 stories) have been constructed.
The housing presale via local agencies has also raised concerns from Macau’s Real Estate Agent Lawyer, Ho Ian Song, since the authorities do not regulate the sale of overseas properties.
“Inevitably there will be more residents purchasing properties in Zhuhai. Some of the buyers might have signed the contract and made the payment without being informed of the risks. If the construction fails to be completed, or the property brokers didn’t open a dedicated amount for the presale deposits as the mainland regulation stipulates, Macau buyers may suffer unnecessary losses,” Ho indicated.
Government spokesperson Alexis Tam also responded to such concerns when announcing the implementation of 24-hour border crossing, stating that the presale of the mainland housing units is “not in the range of Macau authorities’ regulatory purview but depends on the mainland authorities’ regulation.”