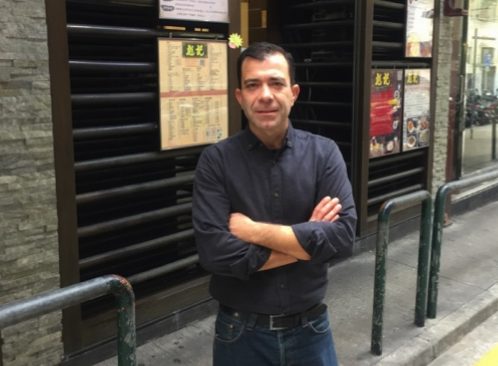 Portuguese journalist and avid Internet blogger, João Botas, is planning to publish a biography next year about celebrated Macau polymath, Manuel da Silva Mendes. His search for sponsorship from organizations in Macau is proving problematic, he said in an interview with the Times last month.

The book, which has come about due to one interested reader reaching out to Botas, will detail Silva Mendes’s life with a particular focus on his years spent in Macau between 1901 and 1931.

“My new book will be published early next year [2017], around March,” he told the Times in a recent interview. “It’s about a [man] called Manuel da Silva Mendes, who was a teacher and a lawyer and he became one of the most knowledgeable Portuguese about Chinese culture and philosophy, writing hundreds of articles about China’s civilization.”

The Portuguese journalist was in Macau recently to make a presentation at the Macau Portuguese School and to attend the ninth edition of the Gathering of the Macanese Communities. Botas says that he is not strictly Macanese, as he disputes the traditional mixed heritage definition. He appreciates the connection the community offers, but personally opts for a more modern, cultural classification.

He also insisted on multiple occasions throughout his interview with the Times that he is not an historian. He told the Times that the time-consuming activities of writing and managing almost daily entries on his online blog, “Macau Antigo,” as well as his full-time profession in journalism keep him more than busy.

“I am not historian; I am a journalist,” Botas was keen to stress, “I employ techniques on behalf of history, with the aim of telling the story for the average person who buys a newspaper.”

He added that the consequence of not being a professional historian means that his approach is “amateurish.”

In at least one sense however, Botas and the historical figure of Mendes have this in common. Mendes is famously regarded as a lawyer, politician and scholar – but not a writer – though the many disciplines in which he dabbled no doubt refined his writing ability and assisted in his study of sinology, for which he is most often remembered today.

Botas’s clear affinity for the polymath is reflected in their similar approach to dabbling in vocations while refraining from regarding themselves as true professionals. “[Mendes] was writing throughout that period but did not regard himself as a writer,” the journalist emphasized.

Not everyone appreciates Botas’s ‘casual’ approach to the subject and his work is sometimes criticized by professionals.

“I think that the [history] academics… have a problem with us amateurs,” Botas told the Times during his interview, “Because they think that we are too amateur. But they can’t reach as many people as we can. So if there is a problem, it’s not with us [journalists], it’s with the academics.”

“It is one thing to do academic research – there is no problem with that. The problem is when they try to sabotage my work by saying that they are better than [journalists, purely] because they are academics,” he continued.

In researching and writing about Mendes, Botas has sought sponsorship to finance the venture. Naturally, he started searching within Mendes’ patron city, Macau, which hosted the polymath until his death in 1931.

“For the book I started to search for sponsors years ago. […] I knew that, with or without support, the book would be completed, because in 2017 it will be the 150th anniversary [of his birth], as he was born in 1867,” said Botas, adding that it has been previously incorrectly published as 1876 in the Macau Art Museum.

Though the search for sponsors started years ago, Botas said that it has not exactly been fruitful. He said that he applied for funding from the Macao Foundation and though
the organization offered some support for the upcoming book, its monetary contribution was small and came with strings attached.

“[The Macao Foundation] sent me a long letter saying that they were honored to present me with MOP5000… which is kind of interesting to say the least,” said Botas, “and I said to them: ‘The idea is for you to support me, and not for me to support you.’ In exchange for this I would need to provide 50 copies of the book and send them [to Macau] from Portugal. The MOP5000 would not be enough to pay for the books [to be produced and shipped],” he said, visibly dismayed.

Asked why the Macao Foundation had made this offer with the attached proviso, Botas was unsure. “I don’t know. Maybe it’s negligence – because I don’t believe they are stupid. Or maybe they just don’t know what they are doing. […] It’s not insulting… but I don’t think they respect me,” he said.

The Macao Foundation was unable to confirm the alleged offer as, according to a representative of the organization, they do not discuss negotiations with anyone other than the applicant in question.

The representative said that usually funding for books about Macau “is [to be used] for the printing and publication costs, which can include editing and translating,” rather than funding the authors themselves for the project.

Meanwhile, the Portuguese journalist is “philosophically opposed” to seeking sponsorship from the casinos. Unwilling to delve too deep into the cause behind his reluctance, Botas said only that he believes the casino operators owe much more to Macau than the financial contribution they make to the government.

He remains however, undeterred and said he will publish the book with or without sponsorship because he has a passionate interest in the history of Macau.

“Macau is unique. You can’t find these circumstances anywhere else,” he said. “You can’t find something even similar to Macau anywhere, throughout history. […] Beside a few problems here and there, 1932 and 1966 and so on, to find a place with this kind of success is impossible. That’s why it’s amazing. You can start digging and you will find many, many things.” 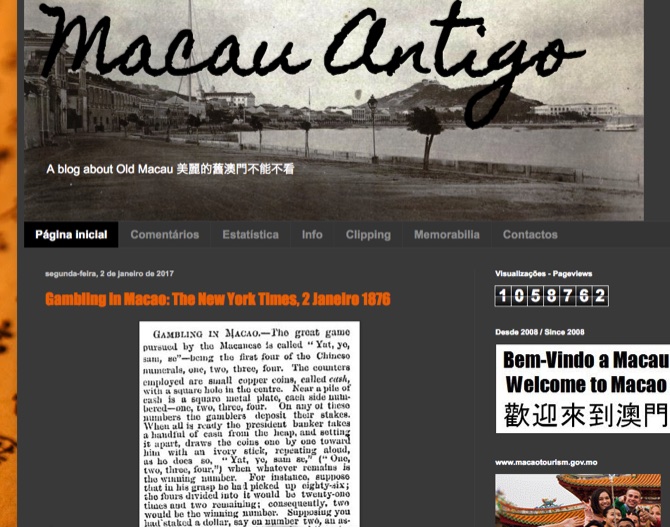 João Botas’s online blog, “Macau Antigo”, which began in earnest about eight years ago, recorded its one-millionth view in September this year, according to data provided by Google Analytics.

Most of his readers are from the Macanese diaspora community living abroad, including in Australia, Brazil, Canada and the U.S.. But there are also non-Macanese readers (Botas supposes) based in Macau and Portugal.

Botas, who regards the occasion as a milestone, recalled the blog’s early beginnings as far back as 2005, years before it went live.

“Around 2005 I started to do some research – just for me, not for anyone else – just to know more about this place,” said Botas, “My idea was to gather the documents that I find and make a project from them, [which I would] put on the Internet.”

It was a learning process, he said, and in the beginning his blog entries were sometimes too long or too short. He also didn’t know which subjects his readers were interested in. “It took some time to get it right,” explained Botas.

“The biggest question about the blog was: ‘Where do I start, and where do I finish? Which [period] of Macau’s history?’ The decision for me was to start at the beginning of Macau, before the Portuguese arrived,” he said, “There was a Macau before the Portuguese! Small villages and few people, but a history [nonetheless]!”