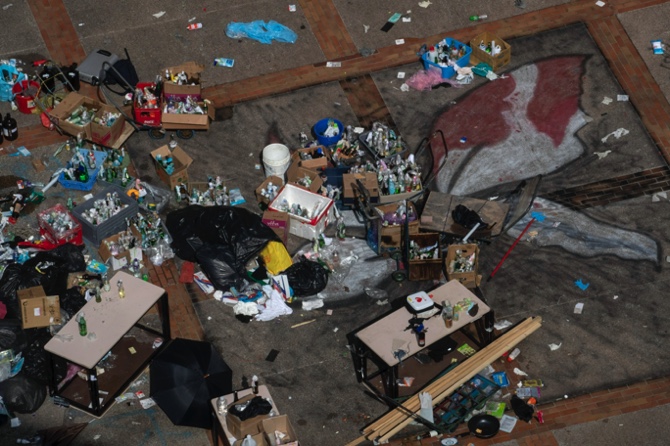 Pale and thin, a teenager wandered the nearly deserted campus of Hong Kong Polytechnic University at about 1 a.m. Wednesday. He wrapped his arms around his body — although it was unclear whether it was to ward off the cold or to reassure himself.

Only a handful of protesters remain at “Poly U,” which hundreds occupied for several days, fighting pitched battles with police in the surrounding streets. Authorities have cut off the campus and are arresting anyone who comes out, at least 700 since Sunday.

The teen, who wouldn’t give his exact age but said he is under 18, is one of the holdouts. He figured he had slept about 10 hours in total since arriving at the campus about five days earlier. He said he had eaten only two biscuits all day because his mind was too distracted, obsessed with one thought: How am I going to get out?

The campus takeovers were the latest escalation in an anti-government movement that has divided the city for more than five months. The protesters’ demands include fully democratic elections and an investigation into alleged police brutality in cracking down on the demonstrations.

The teen arrived at Polytechnic late last week, heeding a call for support from protesters who were occupying five major universities in Hong Kong. It was Thursday or Friday — the days and nights have become such a blur that he kept asking an interviewer what day it currently was.

Like many of the protesters, he spoke on condition of anonymity, fearing arrest, and would only appear on camera with his face covered.

In his mind, as for many others, the police have become as big a problem as the government.

Riot officers began raining tear gas on their defense line outside the university Saturday night, before battering them repeatedly with water cannons and tear gas on Sunday afternoon.

The teen jumped into the fray. He joined others wielding umbrellas — they call them “shields” — and taking the full brunt of the often pepper-spray-laced bursts of water.

Three times he faced the barrages, dashing inside the campus stronghold after each attack to wash off the stinging water, change his clothes and return for the next round.

“I was at the very front,” he said. “It hit me straight on and I was soaked. If I hadn’t been wearing a jacket, my whole body would have felt like it was burning. Just my lower body really stung, and the water also got all over my face and into my eyes.”

It’s one of the roles of the front-line protesters, those who engage the police directly. Wearing gas masks, they throw homemade gasoline bombs and snuff out tear gas canisters to try to keep the police at bay.

He acknowledges that others are likely see their actions as aggressive — the police call them law-breaking rioters — but he says their role is important because the government didn’t back down when hundreds of thousands of people peacefully marched in the streets in the summer.

By Sunday evening, the police had begun to approach from all directions, setting up a cordon around the area. They warned that everyone inside would be subject to arrest.

Some protesters tried escaping on Monday and Tuesday; most were caught or ran back to campus. The government offered to let those under 18 leave without facing immediate arrest, though their identification information would be taken down and they could be charged later.

Worried relatives reached out to their children. The teen got WhatsApp messages from his parents, his stepmother and others asking him to give up. Police allowed religious leaders onto the campus to make similar pleas.

Others turned themselves in. The teenager wasn’t swayed. He said he prefers to fight with all the strength he has. Surrendering would show that he had given up the fight and agrees with the government and the police, he said.

“Even if you get arrested or die, you know that you’ve tried your best and you’ve got no regrets,” he said.

And so he waits, as the hours turn into days, with less and less company around him. ALICE FUNG, HONG KONG, AP