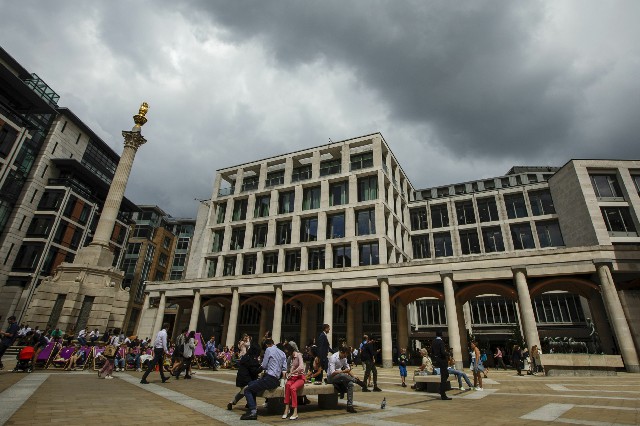 People sit outside the London Stock Exchange in London

Hong Kong Exchanges & Clearing Ltd. is in talks with banks for a loan to back its proposed takeover bid for London Stock Exchange Group Plc, people familiar with the matter said.
The bourse has been discussing borrowing between 7 billion pounds and 8 billion pounds ($9.8 billion), according to the people, who asked not to be identified because the information is private. It’s seeking to form a syndicate of several lenders, the people said.
Under U.K. takeover rules, HKEX must submit a formal offer by Oct. 9 unless LSE grants an extension. Executives from the Hong Kong exchange are in London last week, meeting with LSE shareholders to convince them of the merits of the deal, which is known internally at HKEX as “Project Lima,” according to the people.
As part of its proposal, the Hong Kong bourse is demanding LSE walk away from its own $27 billion deal for data provider Refinitiv. A total of 18 banks signed a $13.5 billion bridge loan this month for that acquisition.
Shares of HKEX rose as much as 2.3% during Monday morning trading in Hong Kong, while the benchmark Hang Seng Index was little changed.
LSE earlier this month rejected HKEX’s 29.6 billion-pound takeover proposal, citing complications ranging from Hong Kong’s unrest to potential problems with regulators. HKEX is counterattacking with a charm offensive, bringing in UBS Group AG and HSBC Holdings Plc to convince shareholders of the merits of its own proposal, Bloomberg News reported last week.
In a note last week, a Sandler O’Neill & Partners analyst said his firm hosted an investor meeting with HKEX Chief Executive Officer Charles Li and co-President Romnesh Lamba this week. The executives emphasized the merits of combining an Asian exchange with a European counterpart, given little overlap in their respective capabilities, the note said.
HKEX is concerned that LSE will try to “run out the clock” before the Oct. 9 deadline, given the target’s lack of cooperation so far, the Sandler O’Neill note said.
Some of the Hong Kong firm’s pitches to the U.K. company’s investors have been met with ambivalence so far, the people familiar with the matter said, as some fund managers told HKEX that they like LSE’s Refinitiv deal and HKEX’s bid isn’t high enough.
No final agreements have been reached, and details of the financing could still change, the people said. A representative for HKEX declined to comment. Manuel Baigorri, Annie Lee & Viren Vaghela, Bloomberg