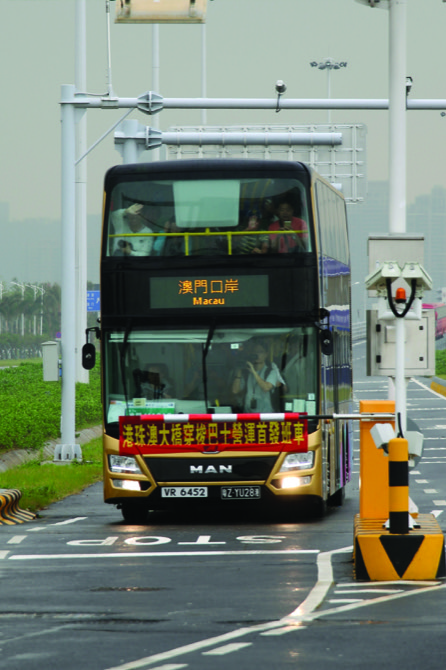 The clock marked 9.15 a.m. when the first vehicle from the Macau side approached the immigration checkpoint on the way to the city of Zhuhai.

The driver, a Macau resident named Sun, when questioned by the media about the procedures to obtain a license to circulate through the new bridge, said, “The procedures are not easy and it’s necessary to deliver several documents from different parties, from Hong Kong and also from [the] mainland. But it’s reasonable.”

Sun said he intended to use the bridge often for business-related purposes such as participating in business meetings in both Hong Kong and Zhuhai.

A few minutes later the second car arrived. Inside, the driver named Wu said Hong Kong was his destination. When questioned as to his opinion about the bridge, he said, “I think this bridge is very good, although I think the quota [settled] of 300 vehicles [for Macau] is too little.”

He also revealed he was doing the trip for the first time as an experience. “I don’t know exactly where the arrival point in Hong Kong is and how to get there.”

A few minutes later, at the bridge arrival checkpoint, the first vehicle incoming from Hong Kong crossed the border successfully. Right behind it, a second vehicle also from the same neighboring region experienced a few issues that led to a longer wait.

Talking to the media, the driver named Chan explained, “I was stopped here waiting to enter [Macau] because I had made the booking for the parking lot starting at 10 a.m. and since the trip took me only 30 minutes to complete I arrived a bit too early,” he said, noting that for this reason he had to wait before proceeding into Macau. 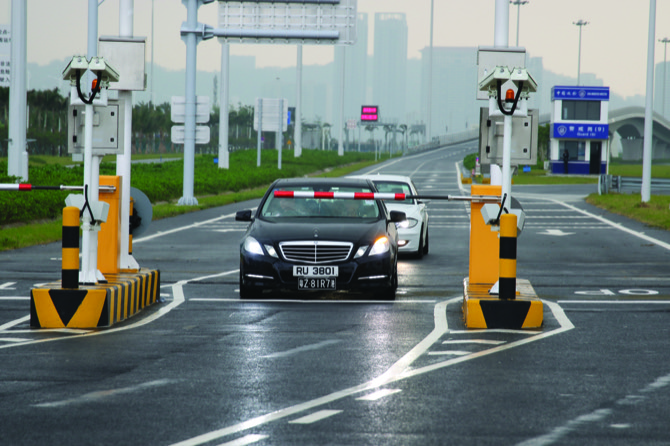 Although the traffic on the bridge registered during the first hours of operation was slow, it was possible to verify a few private vehicles as well as coaches and shuttle buses using the infrastructure. Most of those were travelling without any passengers as they were said to be doing some trial runs to test the system as well as travel times and conditions.

It was 10 minutes past 10 a.m. when the first passenger bus with Hong Kong visitors arrived at the checkpoint, a moment celebrated by the passengers cheering at the bus windows.

At the departures and arrivals hall of the artificial island where the immigration checkpoint is located, many people were seen walking around seeking novelties and getting to know the venue.

Several of them told the Times that they didn’t plan to travel to any of the neighboring cities on this day but, instead, to learn more and get to know more about the venue and procedures for a future travel opportunity.

Among them was a resident named Ian, who aired concerns about the return trip from Hong Kong, saying, “I don’t know exactly how it works; I’m concerned that if I go to Hong Kong I cannot be certain to have a return trip to Macau. That’s a bit scary.” Ian noted that at the ticket counter, the staff representing bus operators were only selling one-way tickets.

“I think this bridge is very pretty and it’s much better. I’m always afraid of getting unwell during the ferry trips. Sometimes when the weather is not that good the ferry [trips] are not smooth and I get dizzy and nauseous. With the bus I think [it] is better, I feel more confident,” he added, although he noted, “one problem I think is also the lack of connectivity from the bridge to Hong Kong city.”

“I think they should improve that so we could get a bus here and reach the city with less hassle. Now it is not like that, it only goes to Lantau [Island],” Ian said.

Problems with connectivity, but this time to the Macau peninsula, were also a topic of discussion at the bus stops of the new bus routes 101X and 102X, with many residents who decided to visit the departure/arrival hall of the HKZMB complaining of the long wait for a bus that would take them back to the peninsula.

“It takes too long,” a man said. “There are a lot of buses stopped right there [across the bus parking] but they have no drivers inside and we are waiting in this long line already for a long time,” he complained.