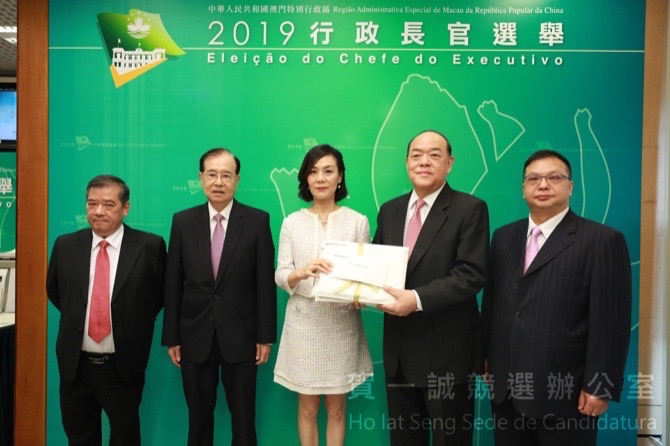 According to the law, these nominations will have to go through the scrutiny of the Electoral Affairs Committee. The Committee will verify the nominations before they become valid.

The Electoral College of this election consists of 399 electors. If all 378 nominations backing Ho Iat Seng are validated, the former frontrunner will be confirmed as the only candidate running in this election.

The law states that contenders in the Chief Executive election must obtain at least 66 nominations to be ratified as candidates.

After submitting his nomination form, Ho was interviewed by the press at the Electoral Affairs Committee office at the Public Administration Building.

He was asked if the 378 backers, representing nearly 95% of the electorate, was a satisfactory number.

“I have done my best,” answered Ho. “I have obtained as many nominations as I could.”

However, he remains cautious about his election campaign. “Whether I will get at least 378 votes in the election depends on my manifesto,” he said. “If the electors are not satisfied with it, I may get fewer votes than nominations.”

He also said that in the previous 15 days, which marked the nomination period of the election, he paid 70 visits to more than 400 associations and electoral college members.

Overall, he has received more than 1,100 comments that mainly focus on housing, transport, medical problems, as well as elderly care, human resources and the development of the Greater Bay Area.

Talking about his visits, he was questioned why he did not visit the “opposition camp”. Ho said there is no such label in Macau. “There are more than 9,000 associations in Macau. I have visited as many as 70 of them in the past 15 days.”

Now, the sole candidate says he will work on his election manifesto, and present it to the general public from the commencement of the official campaign period on August 10. Ho said he would also participate in question-and- answer sessions at that time.