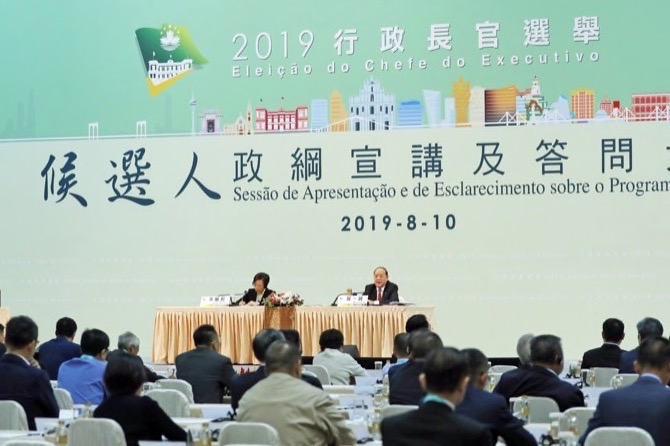 The sole candidate for the Chief Executive election, Ho Iat Seng said on Saturday that he was open to a refinement of the decade-old annual Wealth Partaking Scheme, commonly known as the cash handout.

Ho made the comment during a press conference for his manifesto. Before the conference, the government held a question-and-
answer session with electoral college members at the same location.

He was asked about the cash handouts because there was no mention of the popular scheme in his manifesto. Ho explained that it was not in his manifesto because it is an administrative action that should be addressed in each year’s policy address.

Currently, any Macau ID card holder is entitled to the annual handout. Location of frequent residence is not a decisive factor for eligibility. Ho said he had heard comments regarding the mechanism and he is open to refinement of the scheme.

For instance, if a person is required to stay in Macau for at least 183 days per year in order to be eligible for the handout, the scheme is not beneficial to the integration of the Greater Bay Area. Ho added that it discourages the elderly from moving to the mainland.

Additionally, the administrative cost of determining the location of frequent residence will also be high, he said, citing Hong Kong’s handout of HKD4,000 as an example. The Hong Kong government has spent more on administrative costs than on the handout in some cases.

Ho also compared the two SARs’ annual budgets. He stated that there are 650,000 people in Macau, versus 7.5 million in Hong Kong. The annual budget for Macau is MOP133 billion, while it is HKD560 billion for Hong Kong.

Given these facts, Ho said that social welfare in Macau is not bad, therefore, he is aiming to “refine,” instead of improve, the city’s quality of life factors. He pledged to review the welfare scheme and determine whether there has been any waste or resource misallocation that he could correct.

“Why are residents not happy when the government is spending so much money?” Ho posed during Saturday’s press conference, ultimately attributing the the displeasure of residents to governance in need of improvement.

Ho believes that governance should be refined to make way for a “service-oriented government” and an environment convenient for both people and businesses. This, according to him, will attract investment and safeguard the public’s welfare.

Administrative efficiency is also part of Ho’s plan. In the previous two decades, the government has expanded on a significant scale, despite each administration’s pledge to streamline public services.

The candidate said the structure of the government will no longer expand. Ho said that while there are 38,000 civil servants in Macau, the human resources have not been evenly distributed, with some departments short of staff and other overstaffed.

Emphasizing his 19 years of experience at a national level, Ho thinks there are too many bureaus in Macau. During his work as a Standing Committee member of the National People’s Congress, Ho said he witnessed and worked on the shrinking of the government structure. There are only 26 ministries in the national government, compared with over 60 bureaus here.

“Stand, and then remove. Adjustment should follow clarification of [each bureau’s] function, legal position and authority,” Ho said, stressing that reform should not cause a disturbance to public services.

Despite his pledge, Ho suggested that young people should rest assured. Not expanding the government does not mean that there would not be new people hired. “Every year, there are a lot of civil servants [that are] retiring,” meaning that there would still be vacancies for jobseekers.

Ho also brought up the notion of a “sandwich-class housing staircase” during the press conference. It is a scheme to attract the younger generations, the newlyweds and new parents with two-bedroom apartments. He pledged to expedite the construction of 28,000 subsidized housing units on Reclamation Zone A, so that demand can be ascertained and satisfied.

The first 4,000 subsidized housing units in Zone A will mostly likely be reserved for one-bedroom apartments. Ho thinks this does not fit the demand and development of the younger generations.

Sandwich-class housing is a stage between economic housing and private development. Ho believes it is an attractive proposal. “If there are chances that young people can have less expensive housing, they can have more resources to start their own businesses. We are lacking entrepreneurs now,” said Ho.

Ho also pledged to restart constitutional reform in the Macau SAR, but stressed his respect for the existing electoral college mechanism.

Elector Stanley Au, who ran for Chief Executive in a failed bid in 1999, said on Saturday he agreed that the central government should seriously consider opening up the election system. Anthony Lam