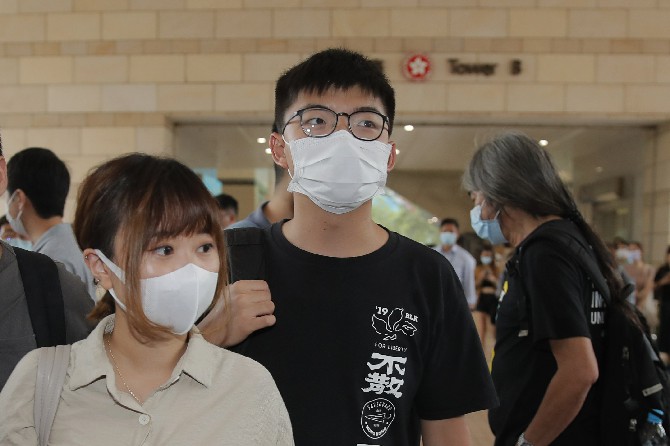 Hong Kong pro-democracy activist Joshua Wong said he was arrested again yesterday for allegedly participating in an unauthorized assembly last October.
Wong tweeted that he was arrested when he reported to the semi-autonomous Chinese territory’s Central Police Station as part of a bail requirement.
He said he was also accused of violating a pre-coronavirus law banning the wearing of masks in public places on the pretext they obscure identity.
Wong told reporters after leaving the police station that it is the third case against him. He vowed to continue to resist.
Wong rose to prominence as a student leader during the 2014 Umbrella Movement protests for universal suffrage, and is among a growing number of activists being charged for various relatively minor offenses since Beijing imposed a sweeping national security law on the territory that has severely restricted political speech.
He played a low-key role in mostly leaderless and sometimes violent anti-government protests last year that led to Beijing imposing the security law. However, with Beijing’s encouragement, Hong Kong authorities have been pursuing charges against major opposition figures for illegal assembly and other minor infractions in what some call a campaign to harass and intimidate.

JOURNALISTS PROTEST NEW RULES
Also yesterday, Hong Kong’s professional journalism association protested new rules restricting who can provide press coverage during demonstrations, saying the government has no right to determine who is or isn’t a reporter.
The rules outlined in a Tuesday letter from police have been criticized as a further erosion of the semi-autonomous Chinese territory’s once robust press freedoms since Beijing imposed a sweeping national security law in June that has had a chilling effect on political speech.
Only journalists registered with the Government News and Media Information Service or members of “internationally recognized and reputable” foreign media outlets will be recognized as journalists during protests, according to the police letter.
That appears to undercut the authority of the Hong Kong Journalists Association and Hong Kong Press Photographers Association to vet candidates for membership and issue press cards, placing that right solely in the hands of government officials, as is the case in mainland China.
“Police cannot be permitted to use administrative means to screen only officially recognized media, thus undermining the fundamental rights of the people of Hong Kong,” the Hong Kong Journalists Association said in a statement.
In their letter, the police said their goal is to weed out troublemakers posing as journalists who they say disrupted police action against protesters over several months of sometimes violent anti-government demonstrations.
“Following the amendment, the definition of ‘media representatives’ will become clearer and unequivocal, allowing front-line officers to efficiently and swiftly verify the identity of media representatives so that facilitation can be provided without compromising police operational efficiency,” the police letter said.
The regulations leave it to the police to determine what media outlets are “internationally recognized and reputable” and could discriminate against freelancers and independent and student journalists, who often work alone with minimal equipment and infrastructure.
Hong Kong has dropped steadily in Reporters Without Borders annual World Press Freedom Index, falling seven places this year to 80. MDT/AP