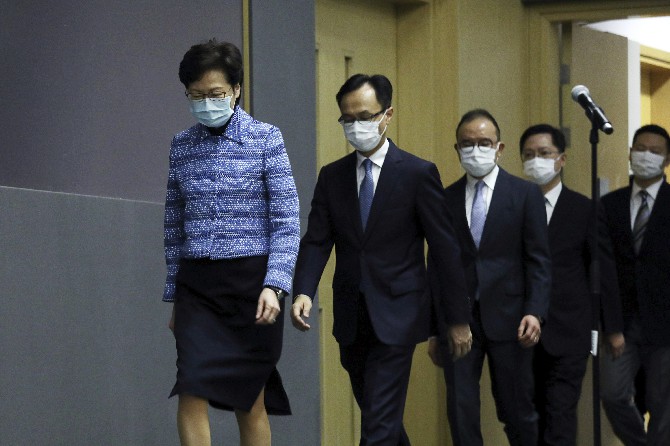 Hong Kong Chief Executive Carrie Lam replaced five senior officials, including the minister overseeing ties with Beijing, in the biggest cabinet reshuffle since hundreds of thousands of demonstrators took to the streets demanding her resignation.
Lam named Immigration Director Erick Tsang to replace Patrick Nip as Secretary for Constitutional and Mainland Affairs and appointed Nip to lead the Civil Service Bureau – two agencies at the center of Beijing’s demands for greater political loyalty from the former British colony. The heads of the Financial Services and the Treasury Bureau, the Innovation and Technology Bureau and Home Affairs Bureau were also replaced.
Lam told a news conference to discuss the moves Wednesday that she hoped the changes would help lay the ground for the financial center’s recovery from a year of protest and pandemic. She left unchanged more high-profile positions such as chief secretary and the finance and justice ministers.
“This reshuffle is aimed at taking us forward,” Lam said. The appointments were announced earlier by China’s official Xinhua News Agency, which said that the State Council had approved the nominations, as required for all top positions in Hong Kong.
The move comes as the city tackles a second wave of coronavirus cases while trying to soften the pandemic’s blow to the economy. Hong Kong has also been battered into recession by the U.S.-China trade war and months of historically large and often violent protests that erupted in opposition to Lam’s effort to allow the transfer of criminal suspects to the mainland.
While Lam has said her government deserves the blame for the “entire unrest,” Chinese President Xi Jinping has continued to back her and she has refused calls to resign. Lam’s approval has risen from historic lows in part due to her early success in managing the coronavirus outbreak, with 18% supporting her in a Hong Kong Public Opinion Research Institute survey released Tuesday, compared with 9.1% in February.
The reshuffle follows Xi’s own shakeup of the agencies who oversee Hong Kong, which was guaranteed a “high degree of autonomy” after its return to Chinese rule in 1997. Luo Huining, a cadre known for executing Xi’s anti-corruption campaign, was made head of the Liaison Office in Hong Kong, while Xia Baolong was named director of the overarching Hong Kong & Macau Affairs Office.
The appointments will likely do little to assuage public opposition. Police over the weekend arrested more than a dozen prominent pro-democracy activists, while Beijing’s agencies in Hong Kong are waging a war of words against the city’s opposition lawmakers over filibustering in the Legislative Council.
Nip, the incoming civil services chief, apologized earlier this week for causing “confusion” and “misunderstanding” with a series of contradictory news releases from the Constitutional and Mainland Affairs Bureau attempting to explain a claim by China’s Liaison Office that it has the authority to supervise Hong Kong’s local affairs. His replacement, Tsang, meanwhile, received fresh scrutiny for giving a recent interview with a portrait of Xi over his shoulder.
Under Tsang’s watch, the immigration department in 2018 denied a visa renewal for Financial Times journalist Victor Mallet after he hosted an event at the Foreign Correspondents’ Club featuring the founder of a banned pro-independence party. More recently, Hong Kong barred entry by Human Rights Watch Executive Director Kenneth Roth weeks after the Chinese Foreign Ministry threatened unspecified sanctions against the group.
The Constitutional and Mainland Affairs Bureau is responsible for overseeing a legislative election in September that could give the pro-democracy opposition a stronger platform to block initiatives backed by Beijing. The Communist Party’s Central Committee last year also signaled a greater focus on Hong Kong’s civil service, urging more measures to teach “patriotism” to public officials.
Lam said Wednesday that the reshuffle was “completely and entirely unrelated” to recent events. She deflected a question about the Xi portrait, saying Tsang was chosen because of his capabilities. Natalie Lung, Bloomberg