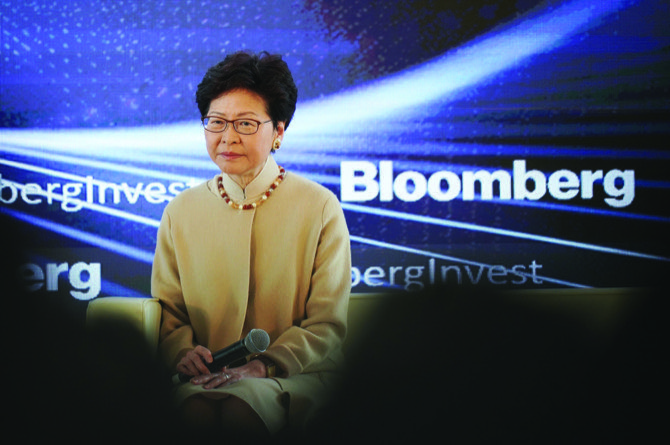 Hong Kong’s chief executive cautioned that the Asian financial hub continued to face the risk of collateral damage from the China-U.S. trade war, saying the tensions were one reason why she’s joined the ranks of those tracking President Donald Trump’s tweets.

“Last night, he was shouting to the media that things were good,” Carrie Lam said of Trump during an interview at the Bloomberg Invest Asia forum in Hong Kong. “I certainly want to see this trade discussion leading to some positive outcome. But I don’t think the problem will go away just like that. We will probably be seeing more tension in other areas.”

“We know that trade issues aside, there are other deep-seated differences between China and the United States,” Lam said. “These will not be easy to resolve, especially in the short term.”

The increased strategic jockeying between the U.S. and China has also fueled questions in Washington about whether the former British colony should continue to enjoy a special trading status as a distinct entity from the mainland. U.S. Consul General Kurt Tong said last month that signs of political encroachment by Beijing had raised cautionary flags for some U.S. observers about the future of Hong Kong’s “high-degree of autonomy.”

Yesterday, Lam sought to reassure investors that Hong Kong still adhered to the rule of law and has an independent judiciary. She said she told a visiting congressional delegation that Hong Kong remained an important source of U.S. trade.

“I said, ‘Nothing has changed, come on,” Lam told Bloomberg Television on the sidelines of the event. “What have we done to cause that sort of considerable worry to the extent of upsetting this very strong and close relationship between the United States and Hong Kong?”

Lam defended a proposed extradition law, saying it wouldn’t undermine business freedom. Her government in January proposed allowing the transfer of fugitives to Taiwan, Macau, mainland China or any jurisdiction with which Hong Kong does not have an extradition agreement, sparking concerns from the European Union, the local business community and some opposition politicians.

“We don’t want Hong Kong to become a haven for fugitive offenders,” she said. “We are doing this with a very good purpose, and if there are concerns it is obligatory of the government to address those concerns.”

A U.S. congressional delegation to Hong Kong earlier this week said the disqualification of lawmakers from the Legislative Council, the refusal to renew a visa for a Financial Times editor last year and the proposed extradition law all posed a major challenge to the “one country, two systems” principle under which Hong Kong was handed back to Chinese rule in 1997, according to Civic Party lawmaker Dennis Kwok, who met with the American lawmakers.

Lam yesterday outlined a list of policy priorities for her government – including new trade offices in Southeast Asia and local tax breaks – meant to signal that Hong Kong remained an open and global financial hub. She said Hong Kong’s asset-management business could grow, and touted the city’s potential as an offshore hub for trading the Chinese currency.

“The best strategy for Hong Kong is we don’t sit and wait until the external environment either goes up or goes down. We do the right things for Hong Kong,” she said in her interview, including creating more new markets and technologies.

Lam also touted the benefits of the “Greater Bay Area,” Chinese leader Xi Jinping’s plan to better integrate the former European colonies of Hong Kong and Macau with China’s mainland. China’s long- awaited plan to create a high-tech megalopolis rivaling California’s Silicon Valley has generated optimism among Hong Kong’s business community, but thorny issues have so far been left out of the plan – including complex questions about which customs, tax and legal systems will predominate.