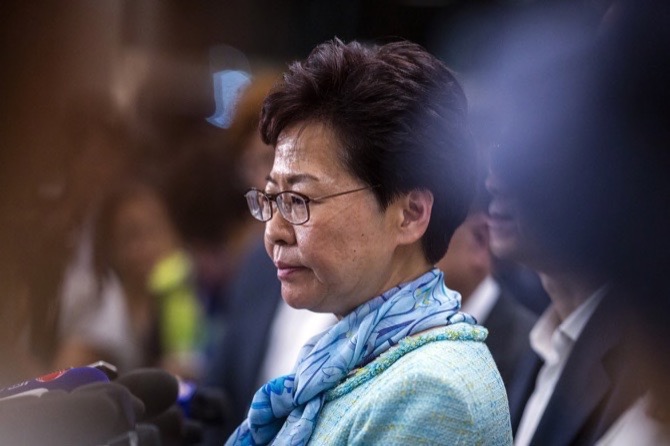 Beijing trusts Lam and her authorities “to continue to govern effectively in accordance to the law,” Wang Zhimin, the director of China’s liaison office in Hong Kong, said at an event in the Asian financial hub yesterday.

China’s government still believes in the ability of Hong Kong’s police force to protect the safety of its citizens, he said, attributing violent protests to a small number of people who had become a “chess piece” for foreign forces aiming at stirring up unrest.

Wang’s comments are consistent with those made by China’s Ministry of Foreign Affairs, which has repeatedly expressed support for Lam and hinted at the role of “foreign interference” in fomenting Hong Kong’s protests. Chinese state media has blasted some demonstrators as “extremists” whose actions threaten to hinder its economic and social development.

Lam on Tuesday declared “dead” controversial legislation that would allow extraditions to the mainland for the first time and sparked weeks of historic demonstrations. But she stopped short of officially withdrawing the bill, providing a new rallying cry and fresh momentum for a protest movement that has persisted through pouring rain, extreme heat and police crackdowns.

Protest leaders vowed to return to the streets, suggesting Lam’s efforts to resolve the political crisis have backfired. Opponents of the bill are planning another rally on Sunday in the East New Territories district of Sha Tin, which is popular with mainland tourists, in an attempt to show support far from the city center.

Wang said China’s stance on the “one country, two systems” framework set up before the former British colony’s return to China was unchanged, calling it the ‘‘best policy arrangement” for Hong Kong’s prosperity and the good of the mainland. Bloomberg