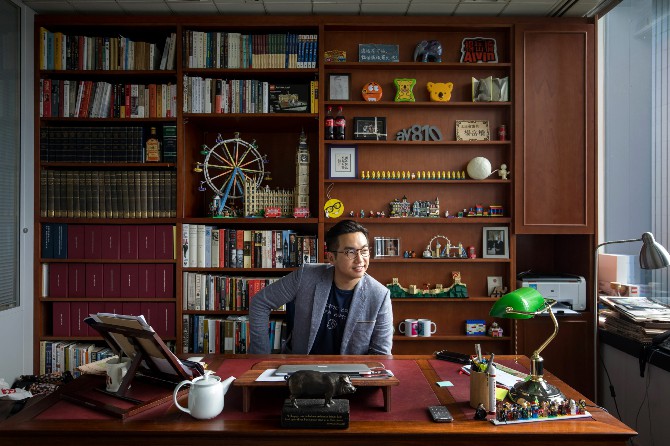 As the leader of one of the largest pro-democracy parties in Hong Kong’s legislature, Alvin Yeung could make history if the city’s opposition wins an unprecedented majority in September elections. Or he could find himself disqualified before the campaign even starts.
The 39-year-old lawyer is among several prospective candidates accused by Chinese authorities of behavior that opposition politicians fear could be used to bar them from running or expel them after the vote. After rejecting a half dozen “localist” candidates for seeking independence from China four years ago, the government and its supporters have criticized activists by name for a growing range of actions that could run afoul of the new national security legislation and other laws.
On Friday, for instance, China’s top agency for Hong Kong accused Yeung of “glorifying illegal behavior” in a statement denouncing several other high-profile politicians. At the same time, he was featured on decks of novelty playing cards handed out in the city showing pictures of prominent opposition figures superimposed against prison bars and listing their “crimes.”
“No one in the opposition can guarantee that they would be able to get into the race,” said Yeung, whose Civic Party currently holds five of the Legislative Council’s 70 seats. “The only thing we can do is to stick to our own principles.”
The push has cast fresh doubt over democracy advocates’ hopes of converting the enthusiasm generated by a historic wave of protests in the former British colony last year into real political power. Not only could the opposition use the council to block Chief Executive Carrie Lam’s agenda, it could theoretically force her to resign by repeatedly rejecting her budget proposals.
How the election unfolds may have big consequences the future of Hong Kong, which has become a key friction point between China, the U.S. and the U.K. The process is unfolding against the backdrop of a U.S. presidential campaign in which President Donald Trump has sought to run against China, announcing last month that he would “begin the process” of revoking special trade privileges granted to the Asian financial center because of its political autonomy.
The U.S. gave Hong Kong its special status after China agreed with the U.K. to preserve the city’s capitalist economy and Common Law legal system until at least 2047 under a “one country, two systems” framework. The U.K.-China negotiations left several controversial items unresolved after the 1997 handover, including plans to expand local elections and enact national security legislation.
Trump levied his threat shortly after the Chinese National People’s Congress approved a plan to bypass Hong Kong lawmakers and impose measures to criminalize the harshest criticism of Beijing. The legislation, which local media have said could be enacted before the Sept. 6 election, is expected to provide the government sweeping powers to jail opposition figures or otherwise block them from office. 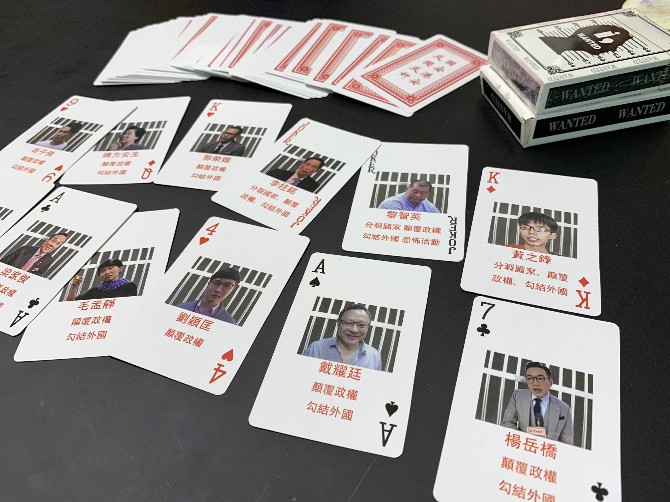 While details of the measures have yet to be made public, a similar proposal withdrawn after street protests 17 years ago would allow for sentences up to life in prison for offenders convicted of crimes such as sedition and subversion. The legislation could be finalized as soon as this week’s meeting of the NPC’s Standing Committee, although the item isn’t currently on the public agenda.
Tam Yiu-chung, Hong Kong’s only representative to the NPC Standing Committee, wrote in a pro-establishment magazine this month that candidates who oppose the effort “should be disqualified.” That would rule out just about all opposition candidates, with a Hong Kong Public Opinion Program survey released May 29 showing 96% of democracy supporters are against the legislation.
“The entire democratic camp, including sitting democratic legislators, can be wiped out because all of us must have or will openly oppose the law as part of our political platform,” opposition lawmaker Fernando Cheung said.
The Hong Kong Constitutional and Mainland Affairs Bureau said in a statement over the weekend that the government would uphold residents’ right to seek elected office, while noting that candidates must sign a declaration to uphold the law. The local Electoral Affairs Commission said separately that decisions regarding the eligibility of candidates would be made solely by returning officers.
After a returning officer barred activist Joshua Wong from seeking a District Council seat last year, the government defended the decision, saying there was “no question of any political censorship, restriction of the freedom of speech or deprivation of the right to stand for elections.”
Still, Hong Kong authorities and their backers in Beijing have been raising the pressure on opposition politicians with a series of arrests and pointed statements. Several pro-democracy lawmakers have been charged in recent weeks with either joining or inciting people to participate in protests rejected by police.
On Friday, the Hong Kong and Macao Affairs Office in Beijing accused several activists of acting as “black hands” to corrupt local schools. All but one of the people named by HKMAO were included on the playing cards, namely Yeung, Wong (King of Diamonds) and legal scholar Benny Tai (Ace of Spades), although it’s unclear who’s responsible for the campaign.
The mere threat of mass disqualifications complicates the opposition’s “35+” plan to capture more than half of the Legislative Council’s seats. A majority would give the coalition control over the chamber’s agenda and the power to block Lam’s bills. One provision of the city’s Basic Law would require Lam to step down if her budget is voted down twice.
To overcome fractures between the moderates and more radical localists, Tai is attempting to organize an unofficial primary on July 11 and July 12 to select favored candidates in each district. Supporters argue such a system is the opposition’s best chance to repeat its historic landslide in District Council elections in November, in which pro-democracy activists won 85% of the seats.
Problem is, any government decision to bar candidates won’t come until after they officially register as candidates between July 18 and July 31. The government has blocked nine candidates from running over their support for independence and self-determination since first taking the then-unprecedented step four years ago of banning politicians because of their political views.
Tai, who’s appealing a 16-month prison sentence for helping to organize the Occupy protests in 2014, said many in Hong Kong view the election as their “last chance” to register their dissatisfaction with Beijing and appeal for support from abroad. 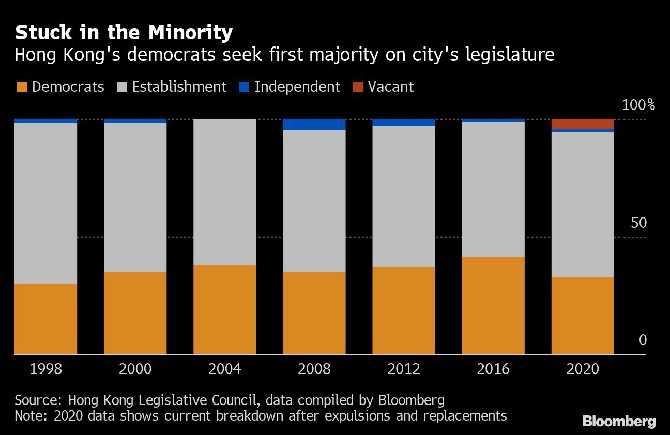 “Even if we are all disqualified, I believe our voice would have been heard,” Tai said. The opposition has launched a crowd-funding campaign to raise HKD3.5 million to cover the expenses of the primary.
In 2016, the opposition won 29 seats, including 19 from geographic constituencies and 10 from “functional consistencies” representing the business community and other interest groups. That success was soon diluted after Beijing intervened to require the ousting of lawmakers who support independence. Six opposition lawmakers were expelled, largely for delivering their oaths improperly.
The opposition believes it could win at least 21 geographic seats in September, meaning it would also need to gain four functional constituency seats to secure a majority. Pro-democracy activists have tried to set up their own unions to register more voters in sectors traditionally won by Beijing loyalists.
The looming national security law and other recent Chinese statements are further expanding the list of political views that could put candidates in jeopardy. But that shared threat could help unify the opposition camp, with some self-described localists such as Ventus Lau saying they’re considering joining the primary effort.
Lau, who was barred from running to replace an ousted lawmaker in 2018, said he was hoping that support for sanctions would grow if Hong Kong takes steps to interfere with the election. “In an ideal situation, the international community would take countermeasures,” Lau said. Natalie Lung & Iain Marlow, Bloomberg