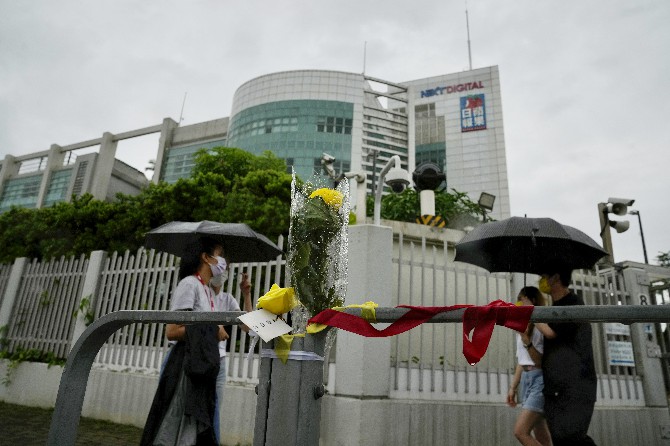 Hong Kong’s pro-democracy Apple Daily newspaper will stop publishing today, following last week’s arrest of five editors and executives and the freezing of $2.3 million in assets under the city’s year-old national security law.
The board of directors of parent company Next Media said in a statement yesterday that the print edition and online edition will cease due to “the current circumstances prevailing in Hong Kong.” The paper later said today’s edition will be its last.
The silencing of a prominent pro-democracy voice is the latest sign of China’s determination to exert greater control over the semi-autonomous territory after huge protests in 2019 shook the government. Since then, Beijing has imposed a strict national security law to curb dissent and revamped Hong Kong’s election laws to keep opposition voices out of the legislature.
The Apple Daily announcement coincided with the start of the city’s first trial under the national security law, which is being closely watched as a barometer of how strictly the courts will interpret it.
The widely expected move to close Apple Daily followed last week’s arrests of the five editors and executives, who were detained on suspicion of colluding with foreigners to endanger national security. Police cited more than 30 articles published by the paper as evidence of an alleged conspiracy to encourage foreign nations to impose sanctions on Hong Kong and China.
The police action against Apple Daily was the first time the national security law had been used against journalists for something they had published, in an intensifying crackdown by authorities in a city long known for its freedoms.
Apple Daily reported that its management made the decision out of concern for employee safety and staffing issues.
Police also yesterday arrested a 55-year-old man on suspicion of foreign collusion to endanger national security. According to Apple Daily, which cited unidentified sources, the man writes editorials for the newspaper under the pseudonym Li Ping.
Apple Daily has been outspoken in defending Hong Kong’s freedoms, and in recent years has often criticized the Chinese and Hong Kong governments for limiting the city’s democratic freedoms as well as constricting the rights of free speech and assembly not found on mainland China.
The paper has in recent years come under increasing scrutiny over its pro-democracy stance. Its founder, media tycoon Jimmy Lai, is facing charges under the national security law for foreign collusion and is currently serving a prison sentence for his involvement in unauthorized assemblies in 2019, during a time of massive anti-government protests in the city.
It was the freezing of assets that spelled the paper’s demise. The board of directors had earlier this week written to Hong Kong’s security bureau requesting the release of some of its funds so the company could pay wages.
The police operation against Apple Daily drew criticism from the U.S., the E.U. and Britain, which say Hong Kong and Chinese authorities are targeting the freedoms promised to the city when the former British colony was returned to China in 1997.
Chinese and Hong Kong officials have said the media must abide by the law, and that press freedom cannot be used as a “shield” for illegal activities.
The national security law imposed last year criminalizes subversion, secession, terrorism and foreign collusion.
The first person to stand trial under the law, Tong Ying-kit, pleaded not guilty Wednesday to charges of terrorism and inciting secession by driving a motorcycle into police officers during a 2019 rally while carrying a flag with the slogan “Liberate Hong Kong, the revolution of our times.” Several officers were knocked over and three sustained injuries.
His trial will set the tone for how Hong Kong handles national security offenses. So far, more than 100 people have been arrested under the security law, including prominent pro-democracy activists such as Lai, Apple Daily’s founder. Zen Soo & Matthew Chean, Hong Kong, MDT/AP