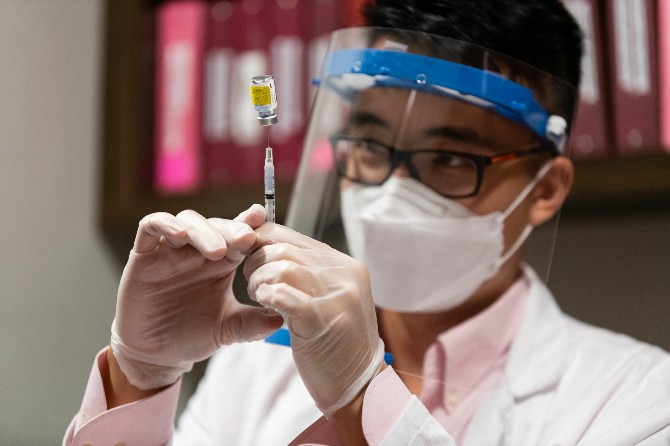 A panel of experts said they have recommended that Hong Kong approve the Pfizer Inc.-BioNTech SE coronavirus vaccine for use, clearing the way for a regulatory greenlight as the city tries to stamp out a winter outbreak that appears to be worsening.
It’s the first vaccine on track for approval in the Asian financial city, which likely means that the vulnerable groups which the government has prioritized like health-care workers and the elderly will receive this shot. The vaccine is being marketed by Shanghai Fosun Pharmaceutical Group Co. in mainland China, Hong Kong, Taiwan and Macau.
In a sign of growing global concern over reports of vaccine-related deaths in Norway, the panel is seeking more information from Norwegian authorities and Fosun, and will ask the government to stop administering the shot “as soon as we receive information that tips the balance ratio of risks and benefits,” said Wallace Lau, the panel’s convenor, at a press briefing yesterday.
The panel also wants more information on which groups to prioritized in administering the vaccine, said Lau. Although most countries are planning to vaccinate their elderly first, the Norway deaths indicate that the side effects or allergies from the shot may be potentially deadly in the old and frail.
After the endorsement by the 12-person vaccine advisory panel, Secretary for Food and Health Sophia Chan will make a final decision on approving the vaccine for use. Officials said that the city’s vaccine rollout will start around the Chinese New Year holiday, which this year begins on Feb. 12.
The progress on vaccines is likely to soothe Hong Kong residents who have seen places like mainland China and Singapore kick off vaccination drives earlier. While the city’s coronavirus cases haven’t risen as dramatically as in western countries, strict social distancing rules like the closure of schools and some businesses have been in place for nearly two months.
Hong Kong’s government said it has purchased enough doses – including from Sinovac Biotech Ltd. and AstraZeneca Plc – to cover its 7.5 million residents, and plans to offer people a choice of which vaccine to take, though that also depends on availability.
Government advisers have defended their relatively slower rollout as due to caution. That stance – shared by many Asia-Pacific economies – may seem strange given the urgency to resume normal life, but low infection rates mean that Asian governments are able to wait to see how the unprecedented vaccination drives play out elsewhere.
The city has seen 163 deaths from Covid-19 – still roughly half of the total death toll inflicted on Hong Kong from the 2003 Severe Acute Respiratory Syndrome, or SARS, pandemic which killed nearly 300 people in the early 2000s. Despite almost two months of social distancing, the city’s infection curve appears to be ticking back up after mass testing was conducted among some housing estates. MDT/Bloomberg