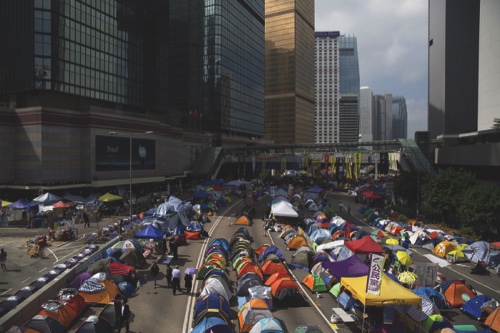 Hong Kong’s government has ruled out talks with pro-democracy protesters, and is preparing to enforce a court ruling to clear the streets, the city’s No. 2 official said.
Student leaders made “unrealistic” demands in the first round of talks last month, Chief Secretary Carrie Lam told reporters yesterday. There’s no need for protest leaders to seek direct talks with Chinese officials in Beijing, she said.
Lam’s comments indicate a firmer stance by the government after a court on Monday upheld injunctions against some protest sites, potentially setting the stage for renewed efforts to forcibly clear the streets. Hong Kong’s pro-democracy protesters are facing increased pressure to end demonstrations now in their seventh week, amid signs of dissent within their ranks and a poll suggesting waning public support.
“Student leaders didn’t show sincerity after the first talks and they hardened their stance,” Lam said. “I think there’s no room for negotiation for the time being.”
The city’s High Court on Monday ruled that bailiffs are allowed to take measures to remove obstructions in parts of Mong Kok and outside Citic Tower in the Admiralty district. The police were directed to assist the bailiffs and to arrest anybody who interferes with the removal of the barricades.
The police may be prepared to act as soon as Nov. 13, Radio Television Hong Kong reported yesterday, citing unidentified people. Officers have been asked to cancel holidays, RTHK said.
The demonstrations were sparked by China’s decision to control the nomination process for the city’s first leadership election in 2017.
Tung Chee-hwa, who was chief executive of Hong Kong from 1997 to 2005, said on Monday the government won’t tolerate the demonstrations for long. A poll commissioned by Ming Pao newspaper released Monday showed 70 percent of the respondents wanted the street occupation to end.
While support for the protesters dipped, Leung’s popularity has improved. The support rating for him rose to 40.4 marks from a record low, in a survey conducted between Oct. 31 and Nov. 5 by the University of Hong Kong’s Public Opinion Programme.
The police in October successfully cleared some make-shift barricades in the city’s central business district, while attempts to remove them in Mong Kok, a popular shopping area, have failed. Protesters continue to occupy a main roadway on the edge of Central, causing daily traffic disruptions in one of Asia’s biggest financial centers.
Two applications for injunctions were filed by an association of taxi drivers and a minibus company in the Mong Kok district. A third was filed by a property company controlled by Citic Ltd. at the main protest site in Admiralty.
The justice secretary may start criminal contempt procedures against people who attempt to interfere with bailiffs enforcing the injunctions, the Department of Justice said on Monday. Bloomberg