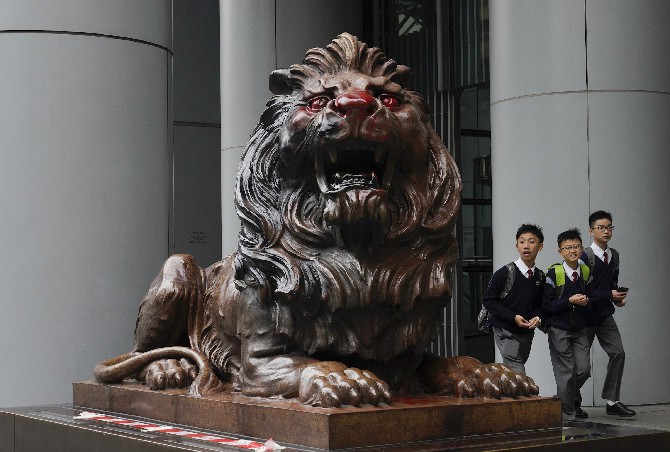 Experts in Hong Kong could be facing a dilemma unseen in more than six months of protests: How to clean a pair of iconic bronze lion statues that have stood guard over HSBC Holdings Plc’s main offices for decades as one of the city’s foremost symbols of colonial-era largess.
Demonstrators defaced the lions, nicknamed “Stephen” and “Stitt,” Wednesday during a mass march intended to show Beijing they would continue to fight its grip into the new year. They splashed the statues with red and black spray paint that depicted bleeding from the eyes, and a phrase in Chinese saying HSBC had been dyed the red of China. At least one statue was set ablaze. Workers struggled to scrub them clean Thursday morning.
The lions’ visages adorn local bank notes issued by HSBC and are a remaining symbol of colonial rule and cultural heritage in the former British outpost. “This is terrible! Worse than even a foreign invasion,” one woman said as she passed by. Another woman cried.
HSBC was “saddened” by the attempts to vandalize the lions and initial cleaning was being carried out, a spokesperson for the bank said in a statement. “We are engaging conservation experts to advise us on the professional restoration required and the process can take time. We are committed to doing everything we can to conserve the bronze lions, which form parts of the bank’s and Hong Kong’s history,” it said.
HSBC first brought the two lions – animals the Chinese believe bring good fortune and prosperity to those they guard – to watch over its Shanghai office on the Bund in 1923. They were replicated in 1935 and shipped to Hong Kong, where one was named “Stephen” – after A.G. Stephen, who commissioned the sculptures and served as the bank’s chief manager from 1920 to 1924 – and the other “Stitt,” after G.H. Stitt, its then-manager in Shanghai.
This isn’t the first time the venerated statues have seen trouble: The lions were confiscated by the Japanese during World War II and shipped to Japan to be melted down. They were rescued in 1945 from an Osaka dockyard and restored to their former positions the following year, with shrapnel and bullet marks on Stephen.
The bank has become a target of protesters’ ire since closing an account linked to the city’s pro-democracy movement in November. In a statement late Wednesday, it condemned the acts of vandalism – which included the lighting of a fire at one branch – and called them “unjustified.”
Police last month arrested four people for suspected money laundering linked to the pro-democracy protests and froze HKD70 million ($9 million) in funds related to the Spark Alliance, a group that helps protesters pay legal fees. HSBC defended its decision to close the account, saying the move was unrelated to the December arrests and followed a “direct instruction” from the customer. Karen Leigh, Stephen Engle & Alfred Liu, Bloomberg