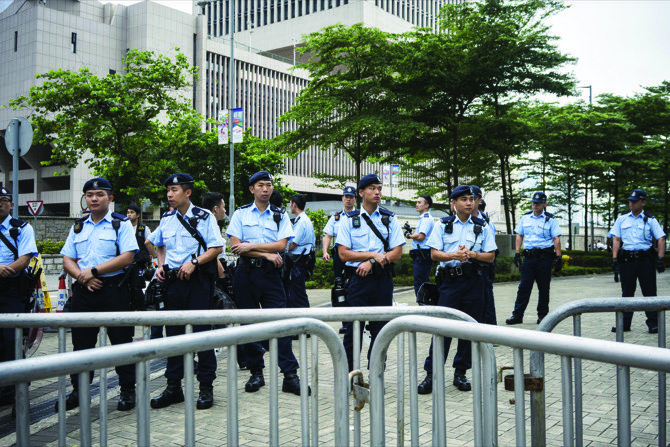 Hong Kong lawmakers grilled the city’s security secretary yesterday over allegations of police brutality during protests over an extradition bill that eventually was suspended.

The agenda for the meeting showed that pro-democracy members were planning to file a motion of no-confidence for Chief Executive Carrie Lam’s handling of the legislation, which sparked the demonstrations over recent weeks including a massive march on Sunday.

The opposition lawmakers were wearing black with white ribbons pinned to their lapels. They put white chrysanthemums, another symbol of mourning, on their desks, and observed a few moments of silence in mourning for a protester who died in a fall last weekend.

The debate, aired online in both Chinese and English itself was a reminder of the divide between Hong Kong, where officials are held publicly accountable and dissent is expected, and the communist-ruled mainland, where such open criticism is not tolerated.

Security Secretary John Lee rejected suggestions that he should resign to take responsibility for police use of aggressive tactics, including beatings with steel batons and heavy use of tear gas. He also defended the decisions made on the scene.

Some of the lawmakers questioned the criticism, saying the police themselves were concerned about their own safety when faced with hostile protesters, some of whom hurled bricks and other debris.

Pro-democracy lawmaker Gary Fan said that police encircled some protesters without warning and fired four rounds of tear gas. The demonstrators “ran for their lives” into a building, Fan said.

“The people didn’t have anywhere to escape from the scene,” he said. “How can this be a minimal use of force?”

Lee reiterated Lam’s insistence that the complaints against police would be handled through agencies established to deal with such issues.

Lam formally apologized Tuesday and said she was responsible for the extradition bill mess. The fact that she did not shed tears or bow in apology was front-page news, with many in Hong Kong criticizing what they said was an apparent lack of contrition.

The motion of no-confidence against Lam was likely to be voted down or boycotted by the majority pro-government legislators. Most did not show up for the questioning session over complaints against police.

Critics of the extradition bill, which would allow some suspects to be extradited to stand trial in mainland courts, want Lam to permanently withdraw the legislation and to step down. They also are demanding the government guarantee that protest participants not be unfairly accused of rioting if they did not commit crimes.

Beijing-appointed Lam would only say she would not revive the bill without certainty of its acceptance — signaling that it has been shelved indefinitely.

Many in Hong Kong fear a further weakening of this former British colony’s legal autonomy, promised for 50 years after Beijing took over in 1997, at a time when communist-ruled China is growing increasingly authoritarian.

One concern is that the law might be used to send critics of Communist Party rule to the mainland to face vague political charges, possible torture and unfair trials.

Lam has insisted the legislation is needed for Hong Kong to uphold justice and not become a magnet for fugitives. It would expand the scope of criminal suspect transfers to include Taiwan, Macau and mainland China.

Samson Yuen, a professor at Hong Kong’s Lingnan University, said the extradition bill is like a “knife at the throat” for many in Hong Kong.

“There’s a lot of energy, emotion and passion and also anger,” he said in an interview. “It’s a total mobilization of society.” Elaine Kurtenbach & Borg Wong, AP

Next protest called for July 1

The Civil Human Rights Front, which organized massive marches on the past two Sundays, has called for another protest on July 1, the anniversary of Hong Kong’s handover from British to Chinese rule in 1997.

Since last Sunday’s march on the government headquarters by an estimated 2 million people, the number of protesters in the area has dropped to just a few dozen.

But yesterday’s developments are the latest indication that the largest and angriest protests in the semi-autonomous Chinese territory in years aren’t over yet.