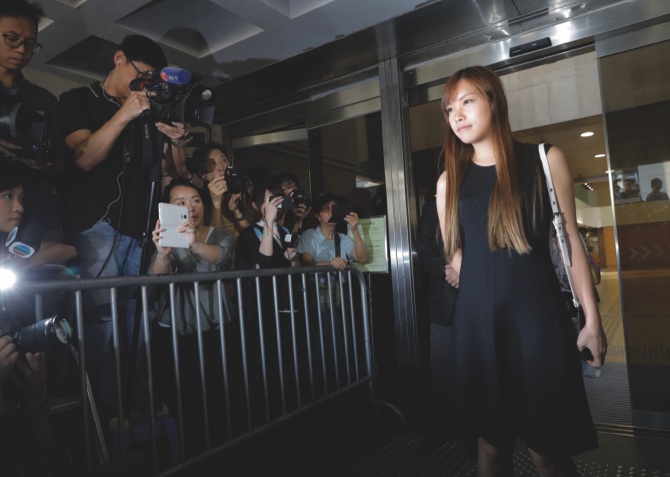 A High Court judge ruled that Sixtus Leung and Yau Wai-ching of the Youngspiration party violated a section of the semiautonomous Chinese city’s mini-constitution, the Basic Law, as well as laws covering oaths taken by officials.

The judge sided with Hong Kong’s leader, Chief Executive Leung Chun-ying, and Justice Secretary Rimsky Yuen, who had filed a legal challenge aimed at preventing the two from taking their seats, arguing that they had effectively declined to take their oaths by distorting them at the swearing-
in ceremony last month.

The provocative tactics by Leung, 30, and Yau, 25, also included displaying a flag that said “Hong Kong is Not China” and using an old-fashioned derogatory Japanese term for China. Yau inserted a curse word into her pledge while Leung crossed his fingers.

In an unprecedented step, Beijing responded by handing down its own interpretation of the Basic Law last week, circumventing Hong Kong’s courts and raising fears that the city’s wide autonomy and independent judiciary under Chinese rule were being undermined.

China’s top legislative panel, the National People’s Congress Standing Committee, sparked protests with its decision that anyone advocating independence for Hong Kong should be disqualified from office, ruling out a second chance for Leung and Yau to take their oaths.

Hong Kong courts are required to enforce such rulings, though Justice Thomas Au said it had no effect on his decision.

Sixtus and Yau said afterward that they were discussing their next steps, including whether to appeal. “With the government exerting so much pressure on the judicial powers, I had expected this ruling,” Yau said outside the court.

The decision raises questions about the fates of several other lawmakers who brandished props or shouted slogans while taking their oaths, including some who were allowed a second chance. CY Leung, as Hong Kong’s leader is known, declined to say before the ruling whether the government would seek to disqualify the other lawmakers, according to the South China Morning Post.

Sixtus Leung and Yau, who were among six localist lawmakers elected in September, had their oaths voided after they mispronounced the country’s name and unfurled banners proclaiming “Hong Kong IS NOT China.” When the Legislative Council president announced a do-over, Leung sued to block the move and vacate their seats.

Any attempt to disqualify more lawmakers risks sparking unrest, said Michael Davis, a former law professor who taught at city universities from 1985 until retiring this year.

“To target people who are in opposition and bar them from the political process is certainly going to move resistance onto the street,” he told Radio Television Hong Kong before the ruling. “I can’t see how reasonable people could come to such an approach.” MDT/Agencies