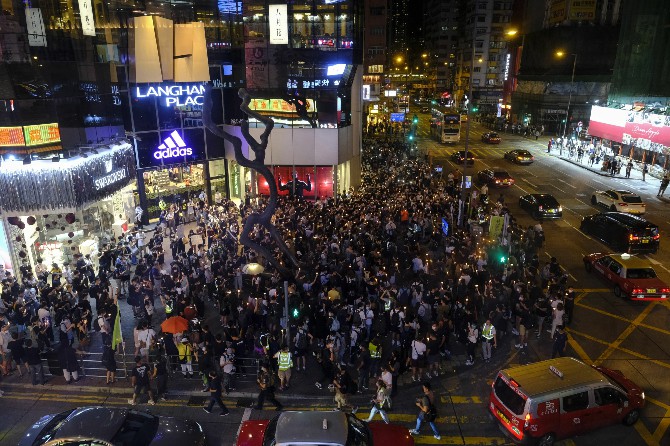 Thousands of people in Hong Kong defied a police ban yesterday evening, breaking through barricades to hold a candlelight vigil on the 31st anniversary of China’s crushing of a democracy movement centered on Beijing’s Tiananmen Square.
With democracy snuffed out in the mainland, the focus has shifted increasingly to semi-autonomous Hong Kong, where authorities for the first time banned the annual vigil that remembers victims of the 1989 crackdown.
Despite the police ban, crowds poured into Victoria Park to light candles and observe a minute of silence at 8:09 p.m. (1209 GMT, 8:09 a.m. EDT). Many chanted “Democracy now”and “Stand for freedom, stand with Hong Kong.”
While police played recordings warning people not to participate in the unauthorized gathering, they did little to stop people from entering the park. Authorities had cited the need for social distancing during the coronavirus pandemic in barricading the sprawling park, but activists saw the outbreak as a convenient excuse.
“If we don’t come out today, we don’t even know if we can still come out next year,” said participant Serena Cheung.
Police said they made arrests in the city’s Mongkok district, where large crowds also rallied. When several protesters tried to block a road, officers rushed to detain them, using pepper spray and raising a blue flag to warn them to disperse or they would use force on the unauthorized gathering. On Twitter, they urged people not to gather in groups because of the coronavirus.
After the vigil ended in Victoria Park, groups of protesters dressed in black carried flags that said, “Liberate Hong Kong, Revolution of our times” as well as “Hong Kong Independence.”
Hundreds and possibly thousands of people were killed when tanks and troops moved in on Tiananmen Square the night of June 3-4, 1989, to break up weeks of student-led protests that had spread to other cities and were seen as a threat to Communist Party rule.
A Chinese Foreign Ministry spokesperson offered the government’s standard defense of the 1989 crackdown.
“The Chinese government has made a clear conclusion about the political disturbance that occurred in the late 1980s,” Zhao Lijian said. “The great achievements that we have achieved […] have fully demonstrated that the development path China has chosen is completely correct, which conforms to China’s national conditions and has won the sincere support of the Chinese people.”
Yesterday, the square where thousands of students had gathered in 1989 was quiet and largely empty. Police and armored vehicles stood guard on the vast space. Few pedestrians lined up at security checkpoints, where they had to show IDs to be allowed through as part of nationwide mass surveillance to prevent any commemoration of the event.
As has become customary, many dissidents were placed under house arrest and their communications with the outside world cut off, according to rights groups.
“We all know the Hong Kong government and the Chinese government really don’t want to see the candle lights in Victoria Park,” said Wu’er Kaixi, a former student leader who was No. 2 on the government’s most-wanted list following the Tiananmen Square crackdown.
“The Chinese Communists want us all to forget about what happened 31 years ago,” he told The Associated Press in Taiwan, where he lives. “But it is the Chinese government themselves reminding the whole world that they are the same government … doing the same in Hong Kong.”
The cancellation of the vigil came amid a tightening of Beijing’s grip over Hong Kong. China’s ceremonial legislature last month ratified a decision to impose national security laws on Hong Kong, circumventing the city’s legislature and shocking many of its 7.5 million residents.
“The ban comes amid an alarming acceleration of attacks on the autonomy of Hong Kong and the undermining of the rights and freedoms of the Hong Kong people guaranteed under Hong Kong and international law,” Sharon Hom, executive director of Human Rights in China, said in a statement.
About 15 members of the Hong Kong Alliance in Support of Patriotic and Democratic Movements of China, the group that organizes the annual vigil, gathered at Victoria Park at 6:30 p.m. (1030 GMT, 6:30 a.m. EDT). They wore black shirts with the Chinese characters for “truth” emblazoned on the front.
The activists lit candles and urged the public to do the same later to mourn victims of the massacre and show their support for the democratic cause in China.
Alliance Chairman Lee Cheuk-yan then led the group of about 15 members in a candlelit procession around the perimeter of the park, shouting slogans including, “Stand with Hong Kong.”
“We have been doing this for 30 years, we have the right to do this, this is a peaceful procession,” he said, stating that it would be absurd if this behavior is criminalized.
The group later removed one of the barricades surrounding the park, and entered. Eventually, thousands followed.
Lee said that the danger in the national security law is that Beijing will define what is a crime. “If we commemorate June 4th, condemn the massacre, (call for the) end of one-party rule, will this be labeled as subversion? We don’t know,” he said.
Other vigils, virtual and otherwise, were held elsewhere, including in Taiwan, the self-ruled island democracy whose government called again this year for Beijing to own up to the facts of the crackdown. ZEN SOO & KEN MORITSUGU, HONG KONG, AP