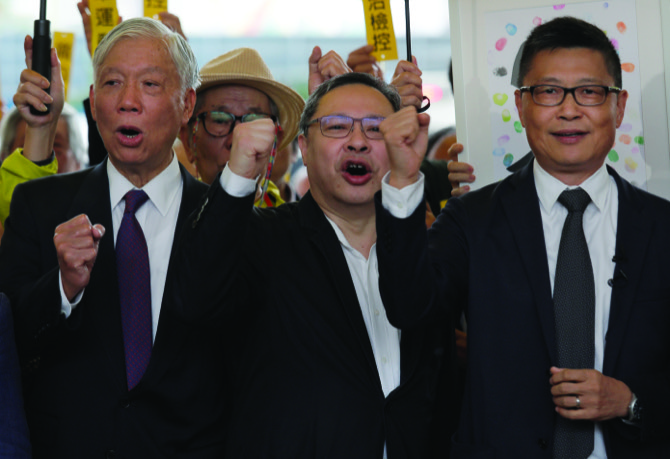 Three protest leaders and six others went on trial yesterday for their involvement in the “Occupy Central” demonstration that paralyzed Hong Kong’s financial district for more than two months in 2014.

Fanned by more than 100 supporters, some holding the yellow umbrellas that came to symbolize the movement, the nine defendants pumped their fists in the air and chanted “Shame to political prosecution!” before entering the West Kowloon courthouse.

Two university professors and a pastor, who together spearheaded the campaign to press for free elections of Hong Kong’s top leader, are charged with conspiracy to commit a public disturbance and incitement to commit public nuisance.

The other defendants — two current and one former lawmaker, two student leaders and a political activist — face charges of incitement to commit a public nuisance. Each charge carries a maximum penalty of seven years.

Three university students prosecuted in 2016 for their leadership role in the protests received community service. But Hong Kong judges have since faced mounting pressure from Beijing to hand down heavier sentences to deter future protests.

Some in the semi-autonomous Chinese city fear that central government meddling will erode judiciary independence, a bedrock value that undergirds the city’s standing as a global business capital.

The protesters, in what was also known as the umbrella movement, laid siege to government headquarters for 79 days but failed to win any concessions. Thousands staked out encampments on major thoroughfares in the financial district. Several hundred were arrested.

Ranging in age from 30 to 74 years old, the nine defendants span generations of Hong Kong citizens who have been agitating for full democracy as the former British colony transitions to Chinese sovereignty under a “one country, two systems” arrangement that is supposed to preserve the city’s civil liberties.

The trial is expected to last 20 days. AP