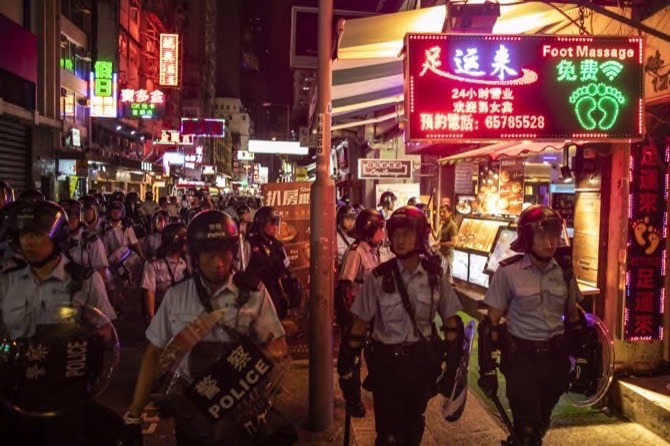 Hong Kong police arrested five people while dispersing a protest in one of the financial hub’s busiest tourist districts, the latest demonstration triggered by a proposed law that would allow extraditions of criminals to mainland China for the first time.

Thousands of marchers walked through the pedestrian-heavy Tsim Sha Tsui area on a rainy Sunday toward the city’s new high-speed rail station to China. By evening they had reached the main entrance, which had been closed off by authorities, and began surrounding the building.

The crowd had largely dispersed by 9 p.m., but some people – wearing the black shirts that have become the protest movement’s unofficial uniform – occupied Nathan Road in the commercial Mong Kok district, where they were confronted by lines of riot police.

Five people were arrested for assaulting and obstructing a police officer when action was taken to disperse protesters, police said in statement yesterday. Police made repeated warnings to the protesters that they were taking part in unlawful assembly and urged them to leave, it said.

Sunday’s march follows weeks of demonstrations against the proposed extradition legislation. While Chief Executive Carrie Lam suspended the bill on June 15, protesters have continued pushing for its complete withdrawal, Lam’s resignation and other demands.

Further protests are now being planned in neighborhoods across the city by civilian demonstrators organizing themselves online who vow to keep spreading the word to every district of the financial hub until Lam responds to their requests.

That includes using their checkbooks: some are calling for people who hold accounts with the local unit of Bank of China Ltd. to pull out thousands of dollars in cash and deposit it into non-mainland banks if there’s no response from authorities by Friday night.

Ventus Lau, a protest organizer, said more than 230,000 people had joined Sunday’s rally. Police – whose turnout estimates are generally lower – said 56,000 people had come out at the march’s peak, according to Hong Kong broadcaster TVB.

The size of the protest “shows Hongkongers are very determined to fight until the very end,” Lau said.

The end point was intentionally chosen to reach out to mainland travelers using the rail link, according to postings and leaflets distributed by organizers. Some protesters waved flags that flew when Hong Kong was a British colony, while others carried yellow umbrellas, the symbol of the city’s pro-democracy Occupy Central protests in 2014.

It’s not the first time Hong Kong protests have reflected anxiety that mainlanders are overwhelming the city – and driving up the prices of goods for its residents. In 2015, demonstrators in Tuen Men and Tsim Sha Tsui scuffled with police as they rallied against traders who come to the city and purchase products to sell across the border.

Prominent activist Joshua Wong joined the demonstrators and said they hoped to impress on mainland visitors the importance of freedom and human rights.

“Even with the Great Firewall censorship, it’s still a must for them to realize it’s time to let Hong Kong people enjoy certain degree of autonomy, and that’s the reason for us to continue our strike,” he said.

Lau said earlier in the day that barricades placed at the West Kowloon station could make it difficult for marchers to clear the streets at the end. “If any danger appears, it will be the full responsibility of the police,” Lau said.

A 53-year-old part-time art teacher who goes by the name Perry Dino was painting an image of the protest on his canvas outside West Kowloon station on Sunday as people marched.

The government “used a lot of money to build this station, but few people and only the mainland Chinese tourists use it,” he said. “Today may be the first day that a large amount of people came to this station. I wanted to come here and support the protesters.” Annie Lee, Natalie Lung & Alfred Liu, Bloomberg

Hong Kong pop singer Denise Ho has taken a message of defiance against China to the U.N.’s top human rights body, denouncing “deceitful promises” by authorities and prompting a Chinese diplomat to interrupt her twice.

The “Cantopop” star asked the Human Rights Council yesterday whether it would suspend China as one of its 47 member states because of “abuses” by Beijing, and whether the rights body would convene an urgent session to protect people in Hong Kong amid rising protests.

Ho, hosted by advocacy group UN Watch, criticized “years of deceitful promises” that fanned the anger of Hong Kong demonstrators who have taken to the streets since early June to protest extradition bills, among other things. AP