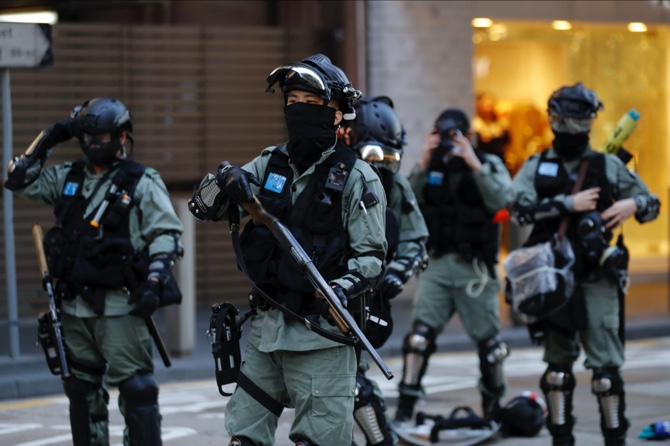 In a demonstration for media cameras, the bomb squad set off a series of controlled explosions in a disused quarry overlooking the city’s high-rise skyline, blowing up a watermelon and shredding the front of a minivan.

In July, police announced the seizure of about 2 kilograms of TATP, which has been used in militant attacks worldwide. Other recent seizures in Hong Kong involved far smaller amounts, just 1 gram, of TATP, or tri-acetone tri-peroxide.

“Obviously, I’m concerned that they are making TATP or are in possession of TATP,” said Alick McWhirter, the squad’s senior bomb disposal officer.

Just 1 gram of the unstable explosive, equivalent to the weight of a candy, could cause serious injuries, he said.

A demonstration blast of 1 gram of high explosive at the quarry above the bomb squad’s fenced-off headquarters caused a loud bang. A blast involving 50 grams, which would fit into a cigarette packet, sent shrapnel flying from the shattered front of the minivan.

The squad used explosives with a destructive force equivalent to TATP but not TATP itself, because the substance is dangerous to handle and is susceptible to bumps, heat and friction.

“Because I like having 10 fingers, I am not going to use TATP,” McWhirter said.

In October, police said a homemade remote-controlled bomb intended to “kill or to harm” riot control officers was detonated as they deployed against protests. Causing a loud thud but no injuries, the small blast was the first known use of an explosive device during the protests that started in June over a contested extradition bill and snowballed into an anti-government, anti-police and anti-China movement.

The bomb squad has also disposed of thousands of gasoline bombs prepared by protesters on university campuses.

McWhirter said that “99% of the protesters in Hong Kong, from what I’ve seen, are peaceful.”

But he added: “There’s clearly, though, a small hard core who are dedicated towards violence.”