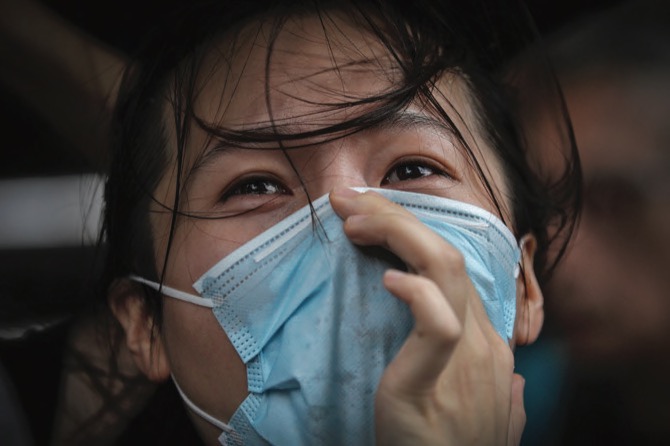 Hong Kong’s decision to charge dozens of protesters with a colonial-era rioting charge that carries a 10-year prison term suggested that the government was heeding calls for a tougher response to the unrest.

The arrests of 49 people – including 44 on the rioting charge – drew outrage from pro-democracy groups and spurred hundreds of demonstrators to surround a police station Tuesday night calling for the suspects’ release. The chaotic scene raised fears of escalating violence after demonstrators scuffled with riot police and six protesters were injured outside another police station by fireworks fired from a passing car.

A similar crowd gathered to support the protesters during their arraignment at Eastern Magistrates’ Court on Wednesday, despite the howling winds and driving rain from an approaching typhoon. All were released on bail, save one who didn’t show up. The proceedings will resume Sept. 25.

“Liberate Hong Kong! Revolution of our time!” supporters shouted. The defendants ranged between 16 and 41 years old, including a pilot, a teacher, a nurse, clerks, cooks and 14 students.

The charges represent a shift for the Hong Kong government, which has refrained from employing the powerful rioting statute since Chief Executive Carrie Lam’s extradition legislation prompted mass protests in June. Rioting prosecutions in wake of a violent clash between police and anti-China radicals in 2016 prompted calls for the law’s repeal and led two suspects to recently secure refugee status in Germany.

“Young people will not be frightened by this thing,” opposition lawmaker Kwok Ka-ki said Wednesday. “Using this kind of unreasonable prosecution and police force will only make Hong Kong worse.”

The protesters were arrested during tear-gas-clouded clashes Sunday after an authorized march toward China’s local government headquarters. A demonstration outside the Liaison Office one week earlier, in which the national emblem was vandalized, drew condemnation and calls for a tougher police response by Chinese state media.

The rioting statute was passed by the U.K.-appointed government in 1967, when the city was in the depths of unrest driven by leftists sympathetic to China’s ruling Communist Party. The law holds anyone who commits a “breach of the peace” while participating in a unlawful assembly liability for a sentence of up to 10 years in prison.

“The government’s strategy to prosecute them on riot charges is understandable, as they want to stop these anti-government protests as quickly as possible,” said Luke Yeung, 26, who works in IT and was outside the court Wednesday. “They want to deter the protesters and instill fear in them.”

Protesters argued the decision was particularly unfair because the 12 men so far arrested in connection with mob attacks on activists earlier this month were charged with the lesser offense of unlawful assembly. Hong Kong’s Independent Commission Against Corruption has launched an investigation into the police’s response to the July 21 attacks in the Yuen Long area, the South China Morning Post newspaper reported, citing unidentified people familiar with the matter.

Hundreds of thousands of people first took to the street in opposition to controversial legislation easing extraditions to China, and have since widened their demands to include Lam’s resignation and an inquiry into what they call an excessive use of force by police. China’s state media has called for greater action by Hong Kong police.

“Although Police have repeatedly warned the protesters who charged the police cordon lines to leave immediately and that they were participating in an illegal assembly, the protesters refused to leave and continue to perform various peace-breaching acts and attacked police officers,” the police said.

The Hong Kong and Macau Affairs Office, China’s top agency overseeing Hong Kong, said in an unprecedented briefing Monday that the unrest in the financial hub had gone “far beyond” peaceful protest. Office spokesman Yang Guang said the government continued to have faith in the police, who “have been fearlessly sticking to their posts and fulfilling their duties against all odds.”

An edition of the Communist Party’s flagship People’s Daily newspaper said Hong Kong police should take stern action to restore order and “not hesitate or have any unnecessary ‘psychological worries’ about taking necessary steps,” in a commentary published in an overseas edition. Bloomberg

The Chinese army has released a promotional video for its Hong Kong-based troops at a time of uncertainty over whether the military will intervene in the city’s summer of protest. The Hong Kong Garrison of China’s People’s Liberation Army posted the video Wednesday evening on its official social media account ahead of the anniversary of the army’s founding yesterday. One section shows footage labeled “anti-riot drill,” in which armed soldiers in riot gear fire tear gas and water cannon at a crowd dressed as civilians, some of whom wore helmets and masks similar to those worn by pro-democracy demonstrators who have taken to Hong Kong’s streets in the hundreds of thousands over the past two months.