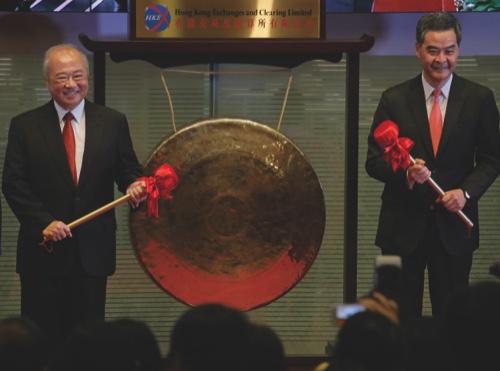 International investors plowed money into Shanghai’s stock market, maxing out their daily limit, in the debut yesterday of a landmark trading link that gives outsiders wider access to mainland China’s main stock market through brokers in Hong Kong.
In contrast, the flow of money in the opposite direction was just a trickle on the first day of trading on the Shanghai-Hong Kong Stock Connect, which lets investors buy and sell shares through each other’s exchanges.
“Today we are going to witness history,” C.K. Chow, chairman of stock exchange operator Hong Kong Exchanges and Clearing, said at an opening ceremony. “It is a breakthrough in the opening up of China’s financial markets and an important milestone in the development of Hong Kong as a unique gateway between the mainland and international investors.”
Chow and Hong Kong leader Leung Chun-ying banged a gong at the Hong Kong stock exchange to mark the start of trading. In Shanghai, city Communist Party Secretary Han Zheng and China Securities Regulatory Commission Chairman Xiao Gang hit their own gong at the same time.
The stock connect gives all sorts of investors outside mainland China access to the stock market in the world’s No. 2 economy for the first time. Until now, access has been closely managed, mainly through a quota program for select fund managers representing a fraction of the overall market.
In a sign of the huge demand from global investors, Hong Kong’s daily 13 billion yuan (USD2.1 billion) quota for mainland China shares in so-called “northbound” trading in the stock connect was used up by mid-afternoon.
The trading link also gives wealthy Chinese investors access to a market outside of the mainland for the first time. But Chinese investors only used up 17 percent of their daily 10.5 billion yuan ($1.7 billion) limit for Hong Kong stocks by the end of the day, according to data posted on the Shanghai Stock Exchange website.
Trading is subject to overall limits of $49 billion for Shanghai shares and $40 billion for Hong Kong shares. Officials say the trading limits are in place so the stock exchanges can regulate the pace of turnover. Investors are also restricted to buying and selling selected stocks, consisting of 568 mainly blue-chip companies on the Shanghai exchange and about half that number in Hong Kong.
Hong Kong has officially been part of China since Beijing took control of the former British colony in 1997 but the Asian financial hub retains its own separate legal and financial system and currency.
The stock link is also expected to expand Hong Kong’s role as a trading hub for China’s tightly controlled currency, the yuan, which Beijing is eager to promote abroad. Last week Hong Kong dropped a daily cap on how much yuan residents are allowed to buy.
“It’s really the beginning of a new era,” said Hong Kong Exchanges CEO Charles Li. When asked by reporters about lackluster gains for Hong Kong shares on the first day, he said the link was “a massive bridge, this is a massive road, and it is going to be here not for days, not for weeks, not even for months, it is going to be here for years and decades.”
“At this point, safety, smooth travel is much more important than how many cars that actually cross the bridge,” he added.
There’s minimal interest from mainland Chinese in buying Hong Kong shares because small-time investors are effectively shut out by a requirement that participants have at least half a million yuan in their accounts, said Huang Cendong, an analyst at Sinolink Securities in Shanghai.
That leaves only the bigger, wealthier clients, who probably already had other channels to invest in Hong Kong, Huang said. Mainlanders who wanted to open a brokerage account in Hong Kong were already able to do so by flying to the former British colony and using their Chinese passports as identification, according to Danny Lam, an account executive at Kingston Securities in Hong Kong. He said most of the interest in the stock link was coming from global rather than local investors.
Huang added that Chinese investors also need more time to study Hong Kong shares, which perform differently than Shanghai shares. He said uncertainty hanging over Hong Kong because of ongoing democracy protests was also damping sentiment. Kelvin Chan, Business Writer, Hong Kong, AP