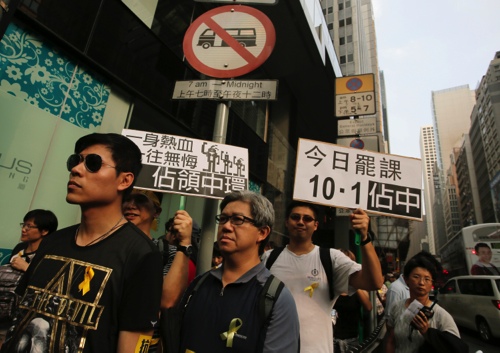 Hong Kong students were marching last night toward the home of Chief Executive Leung Chun-ying as part of a campaign demanding broader voting rights in the city.
Hundreds of protesters, waving signs and chanting “change starts from disobedience” and “we must fight for true democracy” set off from a city park. Police were stationed at Leung’s residence, less than two kilometers away. The students planned to blockade roads leading to the residence to demand a meeting, according to an earlier Twitter posting from one of the organizers.
Last night’s action came after organizers of Hong Kong’s Occupy Central with Love and Peace movement this week invited people to join a “democracy banquet” on the Oct. 1 China National Day, signaling the start of a plan to paralyze Hong Kong’s business district to press for an open election in 2017. They said they expect 10,000 people to join the rally.
Participants should bring enough food and water for two to three days for a sit-in protest that will last days, Chan Kin-
man, a co-founder of the activist group, told reporters yesterday, without giving a specific date for the event.
China last month said candidates for the leadership contest in the city must be vetted by a committee, angering activists who said the group is packed with business executives and lawmakers favoring Beijing. “Citizens should start preparing physically and psychologically now for civil disobedience,” said Chan, an associate professor of sociology at the Chinese University of Hong Kong. “We insist on non-violent means. If we encounter the police and anti-Occupy Central people, we should not do anything that could hurt them physically, psychologically and financially.”
Thousands of Hong Kong university students have boycotted classes this week to express dissatisfaction with China’s electoral reform proposals.
The group behind last night’s march, the Hong Kong Federation of Students, hadn’t applied for a permit, the police said in a statement yesterday.
“We respect the public’s freedoms of expression, speech and assembly,” the police department said in the statement. “Members of the public should comply with the laws of Hong Kong and maintain social order when expressing their views. Police appeal to the participants of the public event to act peacefully and rationally.”
Occupy Central will issue a statement later specifying the exact date of their planned sit-
in, Chan Kin-man, a co-founder of the activist group, told reporters yesterday, without giving a specific date for the event. Oct. 1 and Oct. 2 are public holidays, the first marking the start of the Communist Party’s Chinese rule in 1949.
The Hong Kong police will deploy 7,000 officers to manage the Occupy Central sit-in protest, Radio Television Hong Kong reported yesterday, citing unidentified people.
The movement applied for police permits for rallies on Chater Road and Chater Garden for Oct. 1 and Oct. 2, Apple Daily reported Wednesday. Chater Garden and Chater Road are in the city’s business district, close to the Asian headquarters of HSBC and the office of Li Ka-shing, Hong Kong’s richest man.
Occupy Central will proceed even if the police rejects its permit applications, Chan said. The group has arranged for 30 doctors, 80 social workers and a group of lawyers to assist participants, he said.
In a Facebook posting, Occupy Central asked people who plan to join the meeting to bring food, drinks, spare batteries for phones, sleeping bags, and a change of clothes.
Lawmakers are expected to vote on the electoral reforms next year. Opposition to the proposal is fueling the risk of China canceling the popular election, the city’s top official, Chief Executive Leung Chun-ying, said Sept. 14. Fion Li and Jonathan Browning, Bloomberg