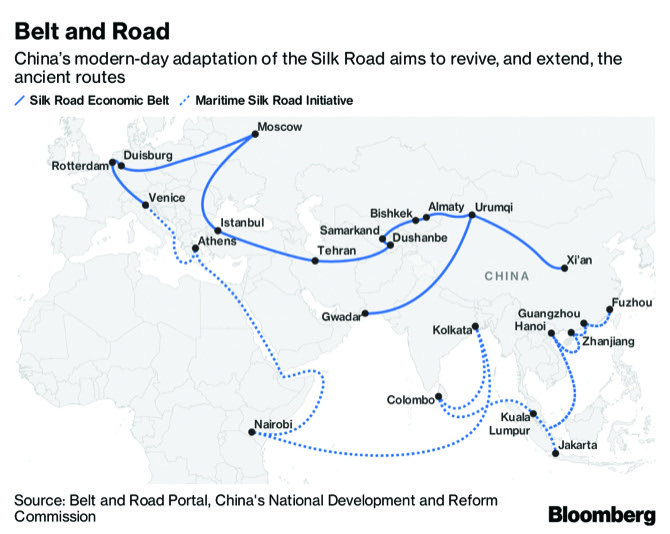 In late August, President Abdulla Yameen of the Maldives hailed the opening of a Chinese-built bridge connecting two islands in the archipelago as “the gateway into tomorrow and the opportunities beyond.”

One month later, Yameen was voted out and the new government of the palm-fringed nation off the coast of India began to uncover the mountain of debt with which he’d saddled the country. A pro-China strongman who jailed opponents and judges, Yameen borrowed heavily from Beijing to build a new runway for the main airport, housing developments and a hospital, as well as the 2.1 kilometer-long “China-Maldives Friendship Bridge.”

On a recent trip to New Delhi, Maldives officials opened up about their frustration over the scale of the debt to China—the equivalent of almost  20 percent of GDP—and the inexplicable preference given to Chinese financing under the Belt and Road Initiative (BRI). In just one example, the previous government rejected a $54 million hospital bid in favor of an “inflated” Chinese offer of $140 million. “We have been burned,” said Economic Development Minister Fayyaz Ismail.

The tourist paradise of the Maldives isn’t the only Asian nation to discover that the promise of Chinese President Xi Jinping’s signature infrastructure program was too good to be true.

After an unprecedented run of funding large-scale investments in projects from railways to highways in poorer countries across Asia, governments are adopting a far more cautious approach to China’s grand plans for what it regards as its backyard. From Malaysia to Sri Lanka, simmering voter anger over deals perceived as unfair or corrupt are prompting close examination, investigation and even suspension of projects until recently taken for granted.

“The first phase of the Belt and Road is effectively over,” said Andrew Small, a senior fellow with the German Marshall Fund’s Asia program. “A new model has not yet emerged, but it is clear that the old one, almost entirely focused on speed and scale, is no longer sustainable.”

Chinese authorities have noted the examples of misconduct and are reassessing and tweaking their global infrastructure plans, said a senior Chinese official who asked not to be named discussing strategy. They are well aware that poorly executed projects can hurt China’s reputation and are alert to the potential for resentment to spread, the official said.

Asia is in desperate need of infrastructure upgrades and no country other than China has the appetite—or the ready resources—to meet the demand for large-scale investments. Yet the criticism in Asia comes at a sensitive time of growing international skepticism of China’s global intentions. While much of the focus is on President Donald Trump’s standoff with Xi over trade, technology and market access, governments across Europe, in Australia and in Japan are tightening up their vetting of Chinese investments, particularly in critical infrastructure such as key ports and network systems.

China has commissioned internal reports that have highlighted the backlash, with the aim of continuing Xi’s outward push at a time when the economy is struggling. Authorities have stepped up scrutiny of BRI projects and investment and are deliberating possible regulations, the official said, adding that China is ready to take measures to clamp down on misconduct.

That translates into “more willingness to renegotiate terms, more focus on project quality, more efforts to cooperate with third-country partners such as Japan, and greater sensitivity to political and macro- economic risk,” said the German Marshall Fund’s Small.

The shift in sentiment among Asian governments is already tangible, and has burst into the open in recent months. In Pakistan, China’s all-weather ally for decades, militants angered by Chinese investment in a remote area bombed and attacked the Chinese consulate in Karachi last month, killing seven people.

In Sri Lanka, there is growing anger over China’s vast economic influence as a threat to the country’s sovereignty, while a Myanmar government adviser criticized as “absurd” the $7.5 billion price tag for its Chinese-backed port, which was agreed to under the previous military government.

In Malaysia, Mahathir Mohamad was elected prime minister in May after questioning Chinese investments on the campaign trail. In office, he slammed a “new version of colonialism,” as his government moved to suspend a $20 billion Chinese railway project, and later cancelled three China-backed pipeline projects worth $3 billion.

Indian officials have long objected to the Belt and Road program because it funds $60 billion worth of infrastructure in Pakistan, including in parts of disputed Kashmir, which India claims as its own.

And though New Delhi lacks the cash to compete against Beijing, Indian diplomats insist countries have been lured into debt traps and view the recent criticism as legitimizing their long-standing position. Indeed, a report this year by the Washington-based Center for Global Development identified eight nations at risk of debt distress from Chinese financing, among them Pakistan, the Maldives, Laos, Mongolia and Djibouti, where China has its only overseas military base.

Increasingly, bashing China makes sound electoral sense in parts of Asia. Indonesia, where the campaign for an April ballot could bring heightened scrutiny of Chinese projects, is an example of how China’s investments are often pulled into emerging market elections, according to Kelsey Broderick, an Asia associate at the Eurasia Group.

“Candidates around the world have used public concerns over Chinese debt as part of their successful challenges to incumbent candidates who have embraced BRI with open arms,” said Broderick. He cited Jair Bolsonaro’s successful run for the Brazilian presidency on an anti-China platform, and said Kenya, Zambia and Thailand could face similar debates.

Part of the concern comes from perceptions that, apart from contributing to unsustainable debt levels, China’s loans serve Beijing’s strategic goals in the Indian Ocean region key to global shipping routes at a time when China is building islands in the South China Sea.

The Trump administration meanwhile has honed its message against the Belt and Road. Vice President Mike Pence told leaders at the recent Association of Southeast Asian Nations summit in Singapore that the U.S. doesn’t “offer a constricting belt or a one-way road.”

The U.S. has set up an agency to lend as much as $60 billion for infrastructure, and last month backed a plan to build a $1.7 billion electricity grid in Papua New Guinea as part of a push to provide countries with alternative lending schemes. Still, that number pales in comparison to the Belt and Road, which Morgan Stanley says may total $1.3 trillion by 2027.

Asia clearly needs more infrastructure: The Asian Development Bank forecasts the region needs $26 trillion worth of highways, railroads and other infrastructure over the next decade or so. In the absence of viable alternatives, China is likely to remain the first port of call. In any case, many countries in Asia and Africa still prefer Chinese loans that come with “no governance or accountability commitments,” said Broderick.

In the five years since Xi launched Belt and Road, “China has been on a learning curve,” said Pang Zhongying, an international relations professor from Macau University of Science and Technology. “It’s the right thing to do for China to reassess its BRI projects and put more emphasis on risk control.” Iain Marlow, Dandan Li, Bloomberg