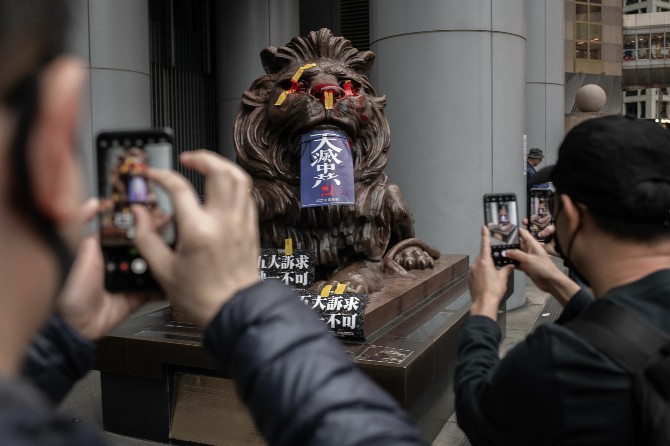 The two bronze lion statues standing guard over HSBC Holdings Plc’s main offices in Hong Kong still bear the marks of an attack by protesters, who last week daubed them with red and black paint, setting at least one ablaze. Graffiti declared that HSBC had been dyed the red of China.
HSBC has vowed to restore the iconic lions to their former glory. But the Asia-focused lender may not find it so easy to disentangle itself from deepening tensions in its biggest market at a time when its new leadership must also repair a relationship with Beijing that’s been weakened by the Huawei Technologies Co. probe.
The bank became the target of the public’s ire in Hong Kong after the police arrested four people linked to a group that helps pro-democracy protesters pay legal fees. HSBC had closed an account used by the group in November.
Bank executives are finding it increasingly hard to keep focused on business and steer clear of politics, said a senior executive in Asia, who asked not to be named discussing internal matters. Political tension on the streets is also causing rifts among HSBC staff. Younger local employees in the Hong Kong office tend to be supportive of the pro-democracy movement, while those with business and personal ties to the mainland are more neutral or pro-Beijing, staff interviewed by Bloomberg said, asking not to be named speaking on a sensitive issue.
With two-thirds of its profit at stake, the London-based firm has previously been able to stay away from controversy as political tensions roiled Hong Kong and dragged in peers including JPMorgan Chase & Co and Citigroup Inc. Chinese retailers and branches of lenders like Bank of China Ltd. have been targeted, while Cathay Pacific Airways Ltd. and the National Basketball Association came under pressure from Beijing after employees supported the demonstrations.
HSBC has said its decision to close the protest-linked account was unrelated to the police action. It’s condemned acts of vandalism against its property as “unjustified” and promised to restore the defaced lions, which it said “form parts of the bank’s and Hong Kong’s history.”
The decision was made after finding unusual transactions, people familiar with the matter said, adding that the bank risked being punished by regulators for any negligence. They asked not to be identified because the matter is private.
“HSBC is now joining Cathay Pacific in discovering that politics and business can’t always be easily reconciled,” said Brock Silvers, managing director at Adamas Asset Management in Hong Kong. The pro-democracy protests are “doubly negative” in that they “detract from the local market while simultaneously complicating the Chinese market,” he said.
A spokeswoman for HSBC didn’t comment beyond the statements released by the bank when contacted by Bloomberg.
Navigating the politics of the protests is one of several challenges facing interim Chief Executive Officer Noel Quinn, who is also dealing with the fallout from HSBC’s assistance with a U.S. probe into Huawei and the wider impact of the U.S.-China trade war.
HSBC was singled out for contributing to the arrest of Huawei’s Chief Financial Officer Meng Wanzhou on charges of violating U.S. sanctions on Iran and Syria. The bank has made the case that it had no choice but to help the U.S. Department of Justice probe. The formal hearings for Meng’s extradition to the U.S. begin Jan. 20 in Vancouver.
The bank is working to improve relations with China, launching a public-relations offensive aimed at leaders in Beijing after missing out on several business licenses.
Hong Kong and China together contributed two thirds of HSBC’s adjusted pretax profit in the first three quarters last year. The group has $1.1 trillion of assets across Asia, according to its interim report last year, with a majority concentrated in Hong Kong.
Born as the Hongkong and Shanghai Banking Corp. in 1865, HSBC has been shifting more resources to Asia, especially China, since 2015 as part of a strategy initiated by Stuart Gulliver and strengthened under the leadership of John Flint, who was ousted in August. Acting chief Quinn will make his pitch to keep the top job next month as the bank undertakes its biggest overhaul in years.
The lender has warned of write-offs, plans to pare back underperforming businesses and people familiar with the matter have said it will try to sell its French retail bank.
It’s the Asian operations that offer the greatest promise and now, some of the biggest challenges.
Hong Kong is HSBC’s single biggest market with 21,000 employees. In China, it has ramped up its investment across financial sectors including commercial banking, credit cards, investment banking and wealth management. The bank now employs more than 8,000 staff as the largest foreign bank in China, according to its website.
As the tensions in the former British colony show few signs of abating, campaigns against the Chinese firms have now expanded to include HSBC. Some protesters have linked the account closure to the police arrests for suspected money laundering, taking to online forums and rallies claiming HSBC has betrayed the Hong Kong people. Bank’s branches and ATMs have been vandalized in areas including Wan Chai and Mong Kok.
One employee who regularly donates to groups that support the protests said she was sad after the lions were vandalized because they are seen as spiritual leaders and HSBC was innocent in this case. She said she won’t turn against the protesters, but feared that some of her colleagues would change their mind. Bloomberg

LVMH, the world’s largest luxury conglomerate, plans to close a store in Hong Kong’s shopping district as overall retail sales dip amid anti-government protests, according to a media report.
The decision comes after Wharf Real Estate Investment Co., the owner of the Times Square mall in Causeway Bay, refused the French retailer’s request to lower rents, the South China Morning Post reported Friday, citing unidentified sources.
Representatives for LVMH and Wharf didn’t immediately reply to an email and calls seeking comments. LVMH has seven other Louis Vuitton stores in Hong Kong.
This marks further pullback by the global luxury retailer as the financial hub faces massive civil unrest for the past seven months that has triggered a record decline in retail sales, scared tourists away and threatens worst-ever job losses, after pushing the local economy into a recession.
Sectors ranging from tourism to luxury goods that relied heavily on Chinese spending abroad are now pivoting away from Hong Kong and aggressively expanding within the mainland to court Chinese spenders who account for a third of global demand. MDT/Bloomberg