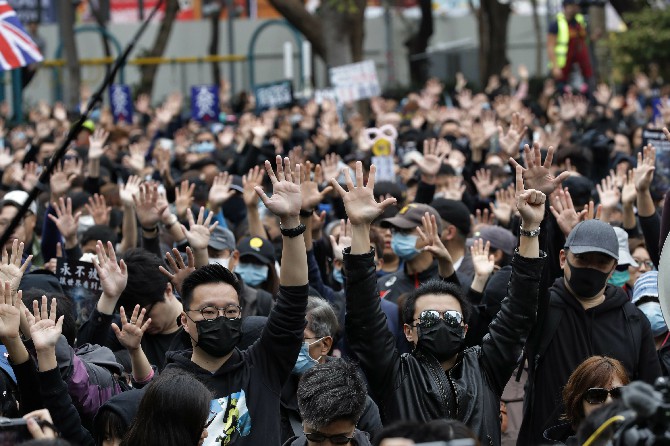 Hundreds of thousands of people packed Hong Kong streets for an annual New Year’s Day protest march as the months-long pro-democracy movement extended into 2020.
At the fringes, further violence was seen between police and demonstrators.
Police said they arrested some 400 people for unlawful assembly and carrying offensive weapons as hard-line, black-clad youths broke off from the main group of marchers and attacked banks and ATM machines with spray paint, hammers and Motolov cocktails. They smashed crossing lights, ripped bricks from sidewalks and barricaded roads in the downtown financial district.
Police used pepper spray, tear gas and a water cannon to drive off the demonstrators, although a government statement said officers were “deploying the minimum necessary force.”
Senior Superintendent Ng Lok-chun told reporters that “rioters” hijacked the protest march and at one point endangered police officers by surrounding and throwing objects at them, which led to police ordering the rally to be called off at 6:15 p.m. Thousands, however, remained in the area and many had yet to set off from the starting point at Victoria Park.
The massive rally followed overnight clashes between police and protesters on New Year’s Eve in a densely populated shopping district. Police also used tear gas, pepper spray and water cannons to break up groups of demonstrators who blocked traffic and lit fires in the street in the working class district of Mong Kok.
Hong Kong toned down its New Year’s celebrations amid the protests that began in June and which have dealt severe blows to the city’s retail, tourism and nightlife sectors.
Such marches have often devolved at their conclusion into violence. Both sides have been accused of provoking clashes, and nearly 6,500 protesters as young as 12 have been arrested in scores of incidents on streets, in shopping malls and on college campuses.
Recent protests have drawn participants from across Hong Kong society, sometimes numbering more than 1 million and packing the downtown area from Victoria Park to the government office complex a short distance away.
The protests began in June over proposed legislation that could have allowed residents to be extradited to China where they could face possible torture and unfair trials. The legislation was withdrawn, but not before the protests expanded to wider calls for reforms in the semi-autonomous Chinese territory.
The protests show no sign of ending despite an overwhelming victory by anti-establishment candidates in recent elections for district representatives, although their frequency and the level of violence has dropped off somewhat.
In her New Year’s address, Hong Kong leader Carrie Lam said the months of protests had brought “sadness, anxiety, disappointment and even rage,” and she vowed to tackle underlying social and economic problems in the coming year.
Lam said she would “listen humbly” to help bring an end to the protests but also reinforced the importance of the “one country, two systems” framework under which China rules Hong Kong and which brooks no challenge to the ruling Communist Party’s ultimate authority.
In his own New Year’s address, Chinese President Xi Jinping referred to the protests, saying “Hong Kong’s prosperity and stability is the wish of Hong Kong compatriots and the expectation for the people of the motherland.”MDT/AP