Hutchison may sell control of Harbour Ring to Oceanwide 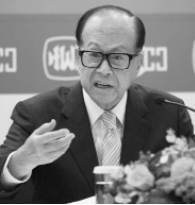 Billionaire Li Ka-shing’s Hutchison Whampoa Ltd. may sell control of property developer Hutchison Harbour Ring Ltd. to a unit of developer Oceanwide Holdings Co. for as much as HK$3.83 billion (USD494 million).
Hutchison units Promising Land International Inc. and Uptalent Investments Ltd. are in talks to sell their 71.4 percent stake in Harbour Ring, according to a Hong Kong stock exchange filing Monday. The deal may trigger a buyout offer for all of Harbour Ring’s shares, it said.
The deal will give Oceanwide access to the international capital markets and “facilitate sustainable development,” the Beijing-based purchaser said in a separate e-mailed statement dated Monday.
The proposed disposal would be at a discount, given Harbour Ring’s market capitalization of HK$5.83 billion at the last traded price, according to data compiled by Bloomberg; at that price the 71.4 percent stake is worth HK$4.16 billion.
Harbor Ring, suspended since 10:40 a.m. in Hong Kong on Aug. 8, was to resume trading yesterday, according to the filing. The stock gained 4.8 percent to 65 Hong Kong cents on Aug. 8 before the halt. Oceanwide gained 1.7 percent to close at 5.34 yuan in Shenzhen trading Monday. Bloomberg