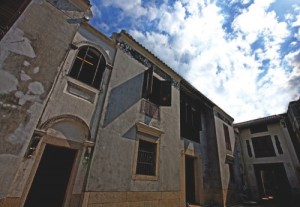 Beginning on October 10, the Cultural Affairs Bureau (IC) will consult Macau residents on the framework of the “Protection and Management Plan of the Macau Historic Centre.”
The consultation document consists of eight questions that cover four different aspects. They include the standards for the control and management of the urban landscape, especially features such as streets and visual corridors; restrictive conditions on construction, namely the height, volume and types of buildings; measures to protect the urban fabric and restrictions on its transformation; as well as the standards of architectural restoration.
In regard to the fact that the consultation will not provide any concrete ideas or measures to address issues relating to protecting the historic centre, IC president Ung Vai Meng said yesterday afternoon in a press conference that the framework consultation is only the first stage.
“More concrete [ideas] will come out sooner or later. But before they are published, we would like our residents to first have a comprehensive idea of our historic centre, especially the management of the historical centre and its directions. When they understand these, and after we have finished collecting residents’ opinions [through the consultation on the framework], it will be easier for us to come up with those more concrete [ideas]. We can call [the consultation] a preparation,” he explained.
A concluding report will be published after the consultation is completed. The president added that an administrative law will be established that is based on the initial consultation of the framework, as well as another consultation to follow. He estimated that the two consultations will be completed by the end of 2015.
However, he could not provide a timeline as to when the administrative law will be in place, as it has to go through the Executive Council for discussion.
Moreover, Ung Vai Meng was asked several times about the height limit of the buildings inside or near the historical areas. He said that the height limit is part of the detailed requirements that will be published after the consultations. He also said that it is impossible to apply a universal height limit on all districts of Macau.
The consultation period for the framework will end on December 8.
The United Nations Educational, Scientific and Cultural Organization (UNESCO) has asked the MSAR government to submit a report on the protection and management of the historic centre before February 1, 2015. Ung Vai Meng said that his department aims to finish organizing the opinions gathered from the consultation and to demonstrate the progress made to UNESCO. JPL