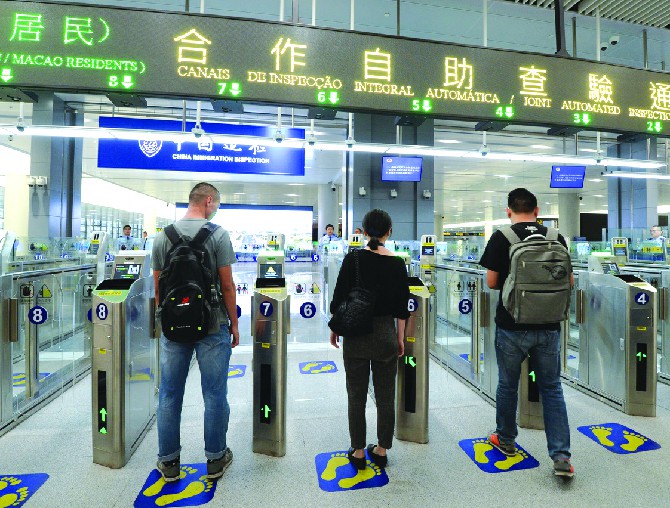 From today, visitors coming into Macau from places with a “severe infection” of the Covid-19 coronavirus and Macau residents who cross the border many times on the same day will be required to undergo medical checks that may go on for hours, announced Elsie Ao Ieong U, Secretary for Social Affairs and Culture and vice director of the government’s Novel Coronavirus Response and Coordination Center.
The news was publicized during yesterday’s daily press briefing held by the Center. Further details were explained by Lei Chin Ion, director of the Health Bureau (SSM).
Lei said that the population of concern will be brought to one of two medical stations which are yet to be established, depending on the border checkpoint through which they enter Macau.
The stations will be set up at the Taipa Ferry Terminal and the Workers’ Stadium right next to the Border Gate. As the SSM director explained, visitors who arrive at a border checkpoint in Taipa or Coloane will be sent to the Taipa medical station. The Workers’ Stadium medical station will handle visitors who enter at a checkpoint on the Macau Peninsula.
On the other hand, any Macau residents crossing the city’s border at “an unreasonable frequency” in a single day will be intercepted and sent to either medical station for follow-up too. Lei hinted that they might even be sent to the Conde S. Januário Hospital if the medical authority has doubts about their health condition.
When questioned about the list of “severely infected” areas, Lei said, “The list keeps changing every day, because there are several factors affecting the constitution of the list.”
Factors that the director mentioned include the number of confirmed cases at a location as well as the growth rate of infections.
“For example, currently there are about 1,000 confirmed cases in Guangdong province, with a steady growth of new cases,” Lei said. “[But] Inner Mongolia, which has 75 cases so far, has not seen the number of infections increasing. As a result, Guangdong will be on the list, while Inner Mongolia will not.”
The director stressed that there are other factors that affect the evaluation, which he declined to disclose yesterday.
As for Macau residents frequently crossing the border, Lei was asked to elaborate on the definition of “frequent,” to which he replied, “for the time being, we will draw the line at three crossings.” Again, this will not be the only determining factor. “Of course, we have the discretion to determine the necessity of medical checks. If a local resident can give reasonable a explanation for their frequent crossing, they may be exempted.”
Lei said his Bureau will maintain constant communication with the Public Security Police Force (PSP), which is in charge of border control in Macau, regarding the measure.
Today will also see the implementation of a new measure that requires foreign workers who are coming from the mainland or have been there in the past 14 days to undergo monitored quarantine.
There are worries that foreign workers may rush into Macau to avoid the new measure. As of 4 p.m. Tuesday, slightly more than 20,000 mainland foreign workers arrived in Macau. The number rose further yesterday, to a total of 31,000 as of the same time.
The authorities reminded the public that the bill for monitored quarantine for foreign workers will be settled by the workers themselves. Populations of concern will be quarantined at a hotel in Zhuhai, and authorities in Zhuhai will guarantee that the bill will not be over 10,000 yuan.
If quarantined in Macau, the bill was announced to be 8,750 patacas. However, the authorities have negotiated with the Pousada Marina Infante, which has agreed to lower the price. The exact amount will be announced in due course.
Today also sees the reopening of certain leisure facilities managed by the Municipal Affairs Bureau. José Tavares, president of the Bureau, announced that parks, leisure areas, trails and country parks will be reopened for limited stints. Park hours will be shortened to 6 a.m. to 7 p.m. daily.
Meanwhile, all indoor venues, kids playgrounds, gym facilities, sports courts, barbeque areas, water parks, camp sites, the Flora Garden Cable Cars and the elevators at the Taipa Grande natural park will remain closed until further notice.
As Hong Kong had a new case who had been to Macau, the SSM has reminded passengers who took bus 101X or the Hong Kong- Zhuhai-Macau Bridge Shuttle at around 5 p.m. on February 5 to remain vigilant about their health condition and contact the government hospital if any symptoms develop.