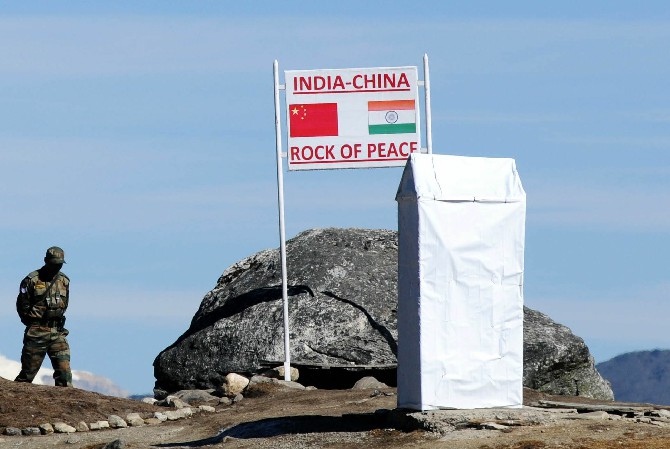 India has moved additional troops along its northern border as it prepares for an extended conflict with neighbor China, after several rounds of talks failed to ease tensions between the nuclear-armed rivals.
China has already placed about 5,000 soldiers and armored vehicles within its side of the disputed border in the Ladakh region, an Indian government official said, asking not to be identified citing rules. India is adding a similar number of troops as well as artillery guns along the border to fend off the continuing incursions by Chinese army, the official said.
The standoff began on May 5, when troops clashed on the banks of Pangong Tso – a glacial lake at 14,000 feet in the Tibetan plateau – leaving scores of soldiers on both sides injured. Since then there has been a steady build up of troops amid continuing face-offs.
Diplomats in New Delhi and Beijing have begun talks after negotiations between Indian and Chinese military officials on May 22 and 23 brought no results, the official said. China’s move to step up incursions at two different locations along the 3,488 kilometer undemarcated border is a deviation from its earlier attempts to gain territory after the two nations fought a war in 1962, according to the officials.
Beijing was committed to safeguarding peace and stability in the border areas, Foreign Ministry Spokesperson Zhao Lijian said in a regular briefing to the media yesterday, noting the two countries had good border-related mechanisms and communications channels.
“We have been following the important consensus reached by the two leaders and strictly observing the agreements between the two countries,” Zhao said. “We are capable of resolving these related issues properly through dialog and consultation.”
Earlier, Prime Minister Narendra Modi discussed the stand-off with National Security Adviser Ajit Doval and Chief of Defense Staff General Bipin Rawat and chiefs of its three armed services. The meeting centered around options available to India, and it was decided to go the diplomatic route while maintaining a tough military posture at the border.
“Talks are on at various levels to resolve the issue,” said S. L. Naramsimhan, member of India’s National Security Advisory Board, which advises the prime minister’s office. “India will defend its sovereignty and territorial integrity and at the same time make all efforts to maintain peace and tranquility along the India-China boundary.”
China’s actions along the border coincide with its attempts to consolidate political and strategic positions across Asia. Its decision to introduce new laws in Hong Kong is threatening to worsen already strained ties with the U.S., it has raised tensions in the South China Sea China by disrupting the efforts of Vietnam, the Philippines and Malaysia as they seek to exploit oil, gas and fishing resources off their shores, while Beijing also waged a sustained campaign to prevent Taiwan from rejoining the World Health Organization.
The world’s second-largest economy has been facing criticism from the U.S., Europe and Australia for its handling of the coronavirus pandemic that was first reported in China’s Hubei province. China, in turn, has accused the U.S. of pushing the world into a “new Cold War.”
The current tensions with India may have been triggered by the completion of a road and bridge in the Galwan sector in Ladakh, the government official said. Under Modi, India has been building border infrastructure, which it says isn’t aimed at any particular country, but rather the development of remote areas. It has completed 74 strategic roads along the eastern border, with plans afoot to finish 20 more by next year.
Although Chinese border aggressions rose last year when India changed the status of the Ladakh province in August 2019 to bring it under the control of the federal government, this stand off is more serious than the Doklam conflict in 2017, officials said.
“The Chinese have been expanding presence in this region for a long time, yet after all these decades, India hasn’t found a way to deal with China’s gradual expansion,” said Phunchok Stobdan, former Indian diplomat and author of the Great Game in the Buddhist Himalayas. “The issue is why is China doing this and why now?” Archana Chaudhary, Sudhi Ranjan Sen, Bloomberg