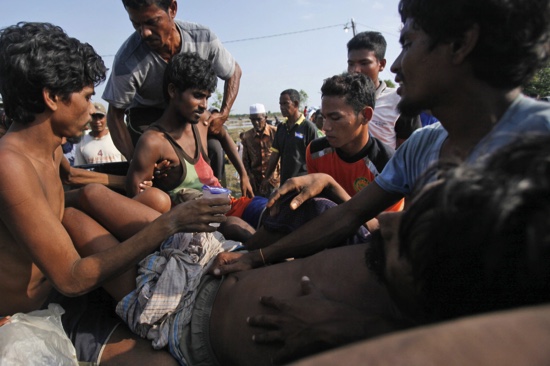 Migrants who were rescued by Acehnese fishermen are assisted by local residents to board a truck that is taking them to a hospital upon arrival in Simpang Tiga, Aceh province, Indonesia

Two migrants said they witnessed an Australian official hand cash to the crew of a people-smuggling boat to take its passengers back to Indonesia.
The allegation of payments to people-smugglers has strained relations between Indonesia and Australia, which has a policy of turning back all migrants who arrive by boat. Migrants escaping poverty or oppression use Indonesia as a transit point for the perilous journey in often barely seaworthy vessels to Australia.
Earlier this month, police in Indonesia’s East Nusa Tenggara province reported that the boat’s captain and five crew members, who are detained on remote Rote island, had about USD30,000 in cash. The group said they were paid to return the 65 migrants to Indonesia after being intercepted by an Australian navy ship on May 20.
One of the migrants in an interview broadcast yesterday on Indonesian television said he saw U.S. dollars wrapped in plastic handed over to at least four members of the crew by an Australian official.
“They don’t want to help us. They want the crew to turn us back to Indonesia with that money,” said the man, a Bangladeshi identified as Ainul by MetroTV.
Australia’s Prime Minister Tony Abbott has sidestepped questions about the incident but has said Australian authorities are being “incredibly creative” in their response to human trafficking.
A second man identified as Sri Lankan by the Indonesian broadcaster said the handover of money was visible to anyone on the boat.
“They asked the crew to bring us back to Indonesia with that money,” he said. “It was not small money, everybody saw it.”
On Tuesday, Indonesia’s Vice President Jusuf Kalla said if Australia is paying people smugglers it would amount to “bribery.” He said the Indonesian government is seeking clarification from Canberra.
Australia’s boat stance has reduced the numbers of migrants attempting to reach its shores by sea and is popular with the Australian public, giving the conservative ruling party a rare policy triumph.
Both of the interviewed men spoke Indonesian with varying fluency. Migrants often spend several years in Malaysia or Indonesia, which have related languages, before attempting to reach Australia. Niniek Karmini and Stephen Wright, Jakarta, AP