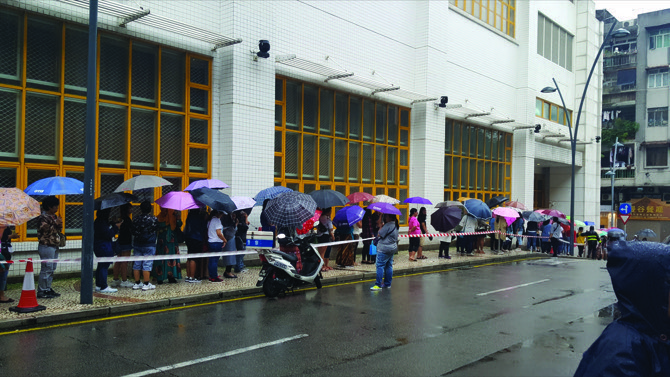 A group representing the Indonesian community has described the remote voting process of its upcoming presidential election as disorganized, with a few community members also reporting some technical issues.

The community gathered at the Community Sports Centre of the Tap Seac Multisport Pavilion to cast their votes for the next presidential election – which will be held in Indonesia tomorrow.

The figure does not include those who turned up at the venue during the election day, as those who were not able to register before the registration’s deadline could register in person.

As cited on local Indonesian radio show, KT News, some voters whose registration has been confirmed by the committee did not receive their C6 form – and were only informed of this on site, requiring them to re-register.

The C6 form is needed for voters to receive their voting papers.

“I’m registered and they [the committee] even checked it already and found my name in the system but I don’t know why they cannot find my C6 form, so they made me re-register,” said a voter.

“The system being not right is an old story,” said another.

According to the report, some photos and videos showed that voters were crowded into the voting premises.

“The previous one was more organized; this time [it] is a little disorganized,” a voter remarked.

The community will either vote for incumbent Joko Widodo or special forces General Prabowo Subianto, in a repeat of the 2014 election.

Meanwhile, remote voting for the midterm elections in the Philippines has also already begun in the Macau SAR and will last for a month.

The consulate is also using electronic vote counting machines in a bid to make the electoral process more transparent.

Some 9,000 overseas Filipino workers are registered voters and are thus eligible to vote throughout the voting period – even on Easter holidays, including Good Friday and Easter Sunday.

Filipinos can vote for 12 senatorial posts and one party-list group in the congress.

Data from the Commission on Elections – Office for Overseas Voting shows that there are over 1.8 million registered overseas voters from the Philippines. LV