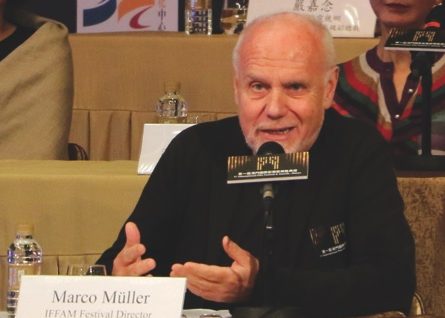 Although Mueller is yet to formally explain his resignation, multiple sources have confirmed to the Times that the reason for his departure is due to “differences of opinion” with the festival’s organizing committee, which are believed to have plagued Mueller’s relationship with local planners from the start.

Penny Lam, a local documentary filmmaker and the curator of the Macau International Documentary Film Festival, told the Times yesterday about rumors in the Macau film sector that the relationship has been “tense” since the renowned director was recruited to the role.

“I’ve heard rumors that Mueller and the organizing committee do not have a good relationship,” said Lam, adding that, “it has always been tense.”

A source close to the Macau Government Tourism Office (MGTO) – a principle organizer behind the inaugural film festival – confirmed “there have been tensions in the relationship [between Mueller and the committee] from the very beginning. As far as I have known there were always problems […] on a weekly basis.”

The source, who asked not to be identified, claims that the problems mostly relate to the festival’s funding and how it is not being used to Mueller’s liking.

The organizing committee of IFFAM Macao noted in an emailed statement that Mueller’s resignation is “due to ongoing differences of opinion between him and Macau Films & Television Productions and Culture Association (MFTPA),” another organizer behind the festival.

However the Times’ anonymous source claims that it was not just differences of opinion that drove Mueller away, but rather a “chaotic” system of organization that empowers less qualified individuals to act as decision-makers for the festival’s planning, impeding Mueller’s ability to act as its director.

“None of the people in the organizing committee know anything about film or organizing film festivals – they are organized by casinos or God knows who” said the source, alluding to the influence of Suncity Group boss Alvin Chau, who serves as MFTPA president. “These people are very wealthy and invite their family [members] to join the organizing committee. They know all the right people but know nothing about film.”

Critics of the organizing process behind the festival and other cultural events in the MSAR repeatedly discuss the widespread practice of nepotism. Mueller’s resignation would seem to be a consequence of well-connected people being brought into the fold to assume positions critical to the events’ success.

Despite the fact that some of the organizers have a background in film production, they do not know “how to organize a festival at all,” the source continued to tell the Times, “which is why Mueller was brought in.”

“We have so much money here in Macau that we could organize a great festival, but it is currently being wasted […] I guess [Mueller] is tired of having his hands tied by people who don’t know anything about film.”

Nevertheless, Mueller’s sudden resignation yesterday will come as a surprise to many. With less than one month to go before the festival is due to open on December 8, observers are describing the decision as “unusual” and are speculating that the scope of the disagreements must have been substantial.

Moreover, to what extent the director’s departure will impact the yet-to-be launched festival remains to be seen.

“It’s very unusual for any sort of event,” for an artistic director to pull out so close to its launch, said Lam. “[Mueller] has a contract, so I don’t know how he can [resign]. Even if he is not happy, he has to finish the festival. […] On the other hand, I heard that the festival has already confirmed a lot of films, so I don’t know what the impact will be.”

Describing the fallout as an “incident”, the organizing committee of IFFAM wrote in an emailed statement to the Times that it “will not affect the organization of the Festival as planned.”

Additionally, the statement specified that the organizing committee has “decided not to commission a new Festival Director but to designate all the work and responsibilities concerned to the Secretariat.”

As for Marco Mueller, it is unlikely that his sudden withdrawal from the festival will impact his future career or reputation. Having served as artistic director for two of the most prestigious film festivals worldwide, his skills are likely to continue being in demand.

“This would not really affect him because he has been in the industry for so long. There are still other festivals in China that want him,” replied the unidentified source when questioned on the matter.

The inaugural edition of IFFAM is to be staged at the Macau Cultural Center and the Macau Science Center between December 8 and 13, attracting some 500 participants, according to the organizers.

At a press conference in May this year, MGTO director Maria Helena de Senna Fernandes remarked that IFFAM was intended to introduce world-class exchange opportunities in the film sector and raise the city’s international profile.

According to a statement issued by the office after the press conference, the MGTO director said that “the event will unleash the synergistic effect between culture and tourism and enrich the cultural appeal” of Macau.

A source close to MGTO lambasted the role of festival organizers in Macau in an interview with the Times last night. The source said that practitioners in Macau’s fledgling film sector do not take “these commercial events” seriously. He believes these commercial events are “just for show”. “Most of the other festivals [in Macau] have been disastrous to say the least – they have little to no credibility,” he said. “Most people in the film community in Macau have no respect for them… except for the smaller [independent] ones.”