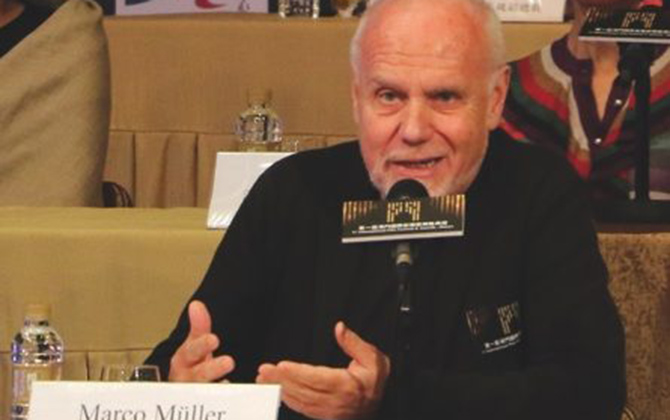 In response to the threat of possible legal action made public yesterday during a press conference for the International Film Festival & Awards Macao (IFFAM), renowned film director and festival planner Marco Müller (or Mueller) told the Times that he and his lawyers would “welcome” the chance “to reveal everything.”

Denouncing the organizing committee led by Macau Films & Television Productions and Culture Association (MFTPA) as “amateurs”, the former festival director said he was shocked to hear government officials yesterday describing the possibility of legal action against him, without having informed him first.

“I was shocked and surprised – as were my lawyers – that it was announced during the press conference that they were considering legal action against me without even informing me,” he told the Times last night. “In any judicial litigation, you have to inform first the person against which the legal action is going to be conducted, and his lawyers. [Only] then can you go public [with the information].”

“It’s unheard of,” he added in a tone of disbelief and bemusement. “It does prove that they are amateurs for behaving in this sort of way… it is the best testimony to the fact that these people are amateurs.”

The consideration of legal action is in reaction to Müller’s sudden resignation from the IFFAM on Sunday, which some officials regard as a breach of his contract.

Nevertheless, Müller says he welcomes any potential legal challenge as it would give him the opportunity to spill the beans. “We all [Müller and his lawyers] absolutely welcome it!” he said. “It will be a pleasure to reveal everything […] but until that moment I will not [divulge] the specifics of the disputes.”

With regards to the disputes, the renowned festival planner confirmed information that the Times was privy to yesterday – namely that they had begun immediately after he assumed the position.

“[As] has been confirmed from a lot of official sources, we had a continuing divergence of opinion about the way [in which] to run a festival. Actually, the divergence of opinion started immediately” after he was hired in February, Müller recalled, describing the months since then as “unbearable”.

“Nobody ever asked me anything; my opinion was never valued,” he complained.

Müller also said that the organizing committee of IFFAM had an entirely different approach to preparing to host an international film festival than the director himself, who has nearly 40 years of experience behind him.

“This is the inaugural [edition of the] festival,” he emphasized, explaining that more groundwork was required than with the planning of an established festival.

“When you want to invent the first edition of the festival, you need to make sure that you can prove that this festival will be about the films and that everything will done for the people who make the films, those who handle films [and their circulation] and also the people who go to see the films,” continued Müller. “You need to find your audience; you cannot just throw films out like that […] without knowing your target audience.”

While the festival director was out speaking with professors and students of film across Macau’s tertiary education network, organizers were obsessed with the idea of festival ambassadors, Müller claims.

“The organizers love the idea of having ambassadors. I told them from the beginning: ‘Please don’t do this. Let’s just focus on having two ambassadors – Johnnie To and Ann Hui – because of their strong, emotional [relationship] with Macau.’ So we should have been content with just two, but now we have… I don’t know how many. I don’t care,” he said.

He also lamented the large number of people who had been recruited to work on the planning of the IFFAM, suggesting that it was far above normal.

“I saw an army of people [in Macau],” remarked Müller. “In Venice, one month before the festival, many people would come. [Before] then, there would be a maximum of 16 or 17 people. In Cannes, it’s even fewer.”

Müller had little to say about the appointment of Macau Government Tourist Office chief, Maria Helena de Senna Fernandes, as acting festival director – even when pressed on the issue – stating his general lack of interest in the decision. “They can do whatever they like,” he said, “I really don’t care about the formal aspect; I only care about the concrete things.”

Macau is epicenter of new wave in filmmaking

The prestigious film director and festival planner told the Times that he has been impressed with the quality of films produced by Macau locals.

“I spent as much time as I could with young Macau filmmakers because I think that there is a movement there,” he said. “Something like a new wave is [emerging]. The [locally-produced] films at the festival are there to prove it… they are really wonderful films.”

Müller also said that the film movement in Macau today reminds him of Hong Kong during the 1980s – the last time he can recall something of a similar magnitude in the Asia-Pacific region.

Marco Müller says that although he will not be around to see the inauguration of the IFFAM, his festival planning consultants will be arriving ten days before its launch to ensure everything runs smoothly.

“My consultants will arrive in Macau ten days before the start of the festival and they will check that everything works. They will check the [technical] conditions and the quality of the subtitles in English and Chinese. They have been doing this for over 20 years. So, we can rest assured that everything will be handled in a [professional] way and that this edition will be a success,” he told the Times.

It’s very important, he said, because “even a small glitch [during the festival] could damage the international image of Macau for years.”

Müller also expressed his sadness that he will be unable to oversee the festival’s inauguration and opening.

“I am very sad. […] I have been working in festivals since 1978 – almost 40 years – and it is the very first time in my life that I cannot be present when the festival [opens]. I am reassured only [by the fact] that my consultants will be there,” he said. DB