Interview | Ian Hutchinson Macau, ‘a different atmosphere that you get nowhere else’

It took a total of three years and thirty operations for Ian Hutchinson to recover from a serious leg fracture and re-injury caused by a  crash and hit. Last year, the English motorcycle racer returned to the track at the Macau Grand Prix only six weeks after he removed the plaster cast from his left leg, eventually winning the race from eight-time Macau champion Michael Rutter. Now the biker is back in Macau. He told the Times that he is fitter, stronger, and more confident than ever.

MDT – Are you more prepared this time?
Ian Hutchinson – Not more, but I’m fitter and stronger than I was. The strength in my leg last year was very poor; it felt very fragile. This year it feels like a normal leg. Maybe [I’m] more confident knowing that I can win, whereas before I never won. 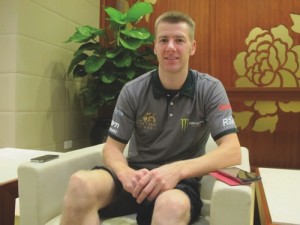 ’t underestimate Michel [Rutter] too. We don’t know why he didn’t win last year; only he knows that. So we definitely can’t take it for granted, as he’s been on the circuit for more than eight years. He won more than anybody else, and he seems focused this year to try again.

MDT – Many of the bikers competing are veterans here. What factor do you think can determine the result?
IH – I think you just have to click into place, as the practices and qualifying [sessions] go along for racing. You don’t really know until you get on the track. Just to keep going, keep pushing. Maybe by racing it, you can make some kind of plan, but it always changes. You have to work according to different plans so that you can only do it as it unfolds.
MDT – Are there any special adjustments on your bike?
IH – The bike this year is the same; I’ve only ridden it once, but it seems a lot easier to ride. Just the gear shift is on the right hand side – the same as last year – so I can change gears with this [right] foot, because this [left] foot I cannot lift. When the bone here [on the left leg] was infected, the tendon which could lift the foot got eaten by the infection.

MDT – How do you like racing here?
IH – Good, it’s different, scary. It’s a different atmosphere that you get  nowhere else. The street race we’re doing in the UK is not the same as racing around skyscrapers and ankle barriers here. There’s perhaps more excitement [here] from the noise and everything built up around, compared to country lands in England. [Are the roads here good?] Last year no, bumpy. But they tell us they’ve done a lot of surface work.

MDT – How do you feel about teaming up with strong opponents?
IH – It’s good to have two strong people at your side. If one of us is struggling and one isn’t, you know it’s not the bike. Either that, or there’s something that can be done to fix the bike. Last year I was on my own, struggling with the bike. We tried to make changes, it got worse, worse, worse. If there’re two people, we’ll be both trying stuff and maybe come up with a better solution.

MDT – How about the weather here?
IH – For me, I always feel more confident here because it’s hot. When you have the cold back in UK, you always feel there’s no grip. For me, it’s good just to go out every time and know that the track is hot here; as soon as you begin the race, you can ride fast. BY