Interview | Stuart Easton ‘You have to be inch-perfect’ 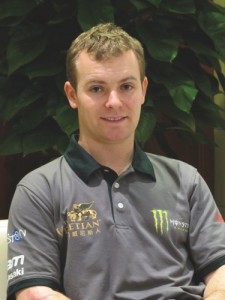 I know how close the margins for error can be, so you can never let yourself get too carried away

After a four-year absence from the Macau Grand Prix, Scottish motorcycle racer Stuart Easton is back at the Guia Circuit with the latest champion, Ian Hutchinson on his team. Besides holding three consecutive Macau GP victories from 2008 to 2010, Easton still holds the lap record. The Scotsman also has a trio of British Superbike Championship race successes to his name. The Times spoke  to the former champion about his comeback.
Macau Daily Times – Are you ready for your comeback to Macau GP?
Stuart Easton – It feels like it’s been two years, but it’s actually been four. We are ready for the comeback; a little bit nervous, which is probably quite normal. But the bike has been racing all year, so I’m comfortable with the bike and the team.

MDT – You’ve won at the MGP three times, why do you still feel nervous?
SE – Probably the danger. The risk factor is obviously high. But I’ve won here before, many times, I know what to do and how to do it. But doing it is just another thing.

MDT – How do you like the street tracks in Macau, especially the Guia Circuit?
SE – It’s very unique for sure; there’s no circuit like it in the world anywhere else. It’s all barriers and stone walls for the whole lap. However, the danger and the risk is high, so when you do win, it makes the feeling even better.

MDT – Do you have any strategy to defeat your opponents?
SE – No, there’s no secret. Just you have to be faster than everybody else. You have to be confident in yourself. I think the bottom line is if I did my best and the bike is ok, we should be able to win. And if we don’t, we’ll come back next year. (…) Because it’s so dangerous, I don’t want to say I’m going to win and push more than anybody else.  I know how close the margins for error can be, so you can never let yourself get too carried away; you need to be sensible.

MDT – What are your strongest aspects?
SE – For me, consistency and accuracy, which you need here; and, touch wood (03:25), I don’t make any mistakes. You can’t make mistakes here, you have to be inch-perfect. I can gauge the speed going into the turns; it’s more of a natural feeling, from the vision and the field. Normally I’m quite consistent and accurate, I think that’s what you need here more than anywhere.

MDT – Do you need special changes of the motorbike for MGP?
SE – I’ll be using the same engine and all the same tires I used in the British Championship. Essentially it’s all the same; just maybe to change the suspension slightly for the Circuit.

MDT – Why are you in this game despite the dangers?
SE  – I have a five-year old son, sometimes when you have bad days, you ask yourself why you even bother, but the feeling you remember from the wins is what makes you participate again.

MDT – How do you feel about the atmosphere around the GP here?
SE – It’s always good to be here. It’s a special place, a lot different from home. The atmosphere is special because of the nightlife and all the lights. (…) All the days we have been here have been quite pleasant. There have been years that have been really hot for me. But this year it seems just nice.  BY