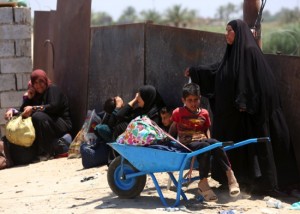 In this Saturday, May 16, photo, Iraqis flee from their hometown of Ramadi, Iraq, rest near the Bzebiz bridge, 65km west of Baghdad

Islamic State militants likely killed up to 500 people — both Iraqi civilians and soldiers — and forced 8,000 to flee from their homes as they captured the city of Ramadi, a provincial official said yesterday, while the government-backed Shiite militias vowed to mount a counter-offensive and reclaim the Anbar provincial capital.
The statements followed Sunday’s shocking defeat of Iraq’s security and military forces as the militants swiftly took control of Ramadi, sending government forces there fleeing in a major loss despite the support of U.S.-led airstrikes targeting the extremists.
Bodies, some burned, littered the city’s streets as local officials reported the militants carried out mass killings of Iraqi security forces and civilians. Online video showed Humvees, trucks and other equipment speeding out of Ramadi, with soldiers desperate to reach safety gripping onto their sides.
“We do not have an accurate count yet,” said an Anbar spokesman, Muhannad Haimour. “We estimate that 500 people have been killed, both civilians and military, and approximately 8,000 have fled the city.” The figures could not be independently confirmed, but Islamic State militants have in the past killed hundreds of civilians and soldiers in the aftermath of their major victories.
The estimates given by Haimour are for the past three days, since Friday, when the battle for the city entered its final stages. The 8,000 figure is in addition to the enormous exodus in April, Haimour said, when the U.N. said as many as 114,000 residents fled Ramadi and surrounding villages at the height of the violence.
Sunday’s defeat recalled the collapse of Iraqi forces last summer in the face of a blitz by the extremist group across much of northern and western Iraq. Later, IS declared a caliphate in areas under its control in Iraq and neighboring Syria. Backed by airstrikes from a U.S.-led coalition since August, Iraqi forces and allied militias have recaptured some of the areas seized by the Islamic State over the past year, but the latest defeat in Anbar calls into question the Obama administration’s hopes of relying solely on air power to support Iraqi forces in the battle against IS as well as whether these forces have sufficiently recovered from last year’s stunning defeats. Sinan Salaheddin and Ahmed Sami, Baghdad, AP