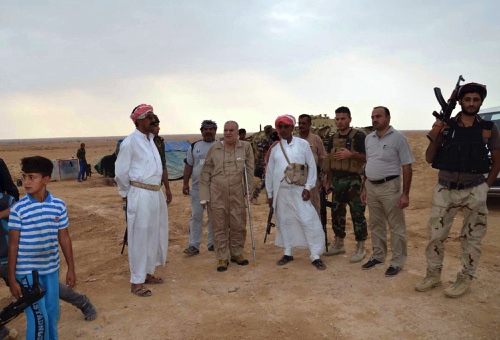 A suicide bomber struck a Shiite mosque in central Baghdad yesterday, killing at least 17 worshippers and wounding dozens, Iraqi officials said.
The attack comes a day after a suicide bombing targeted another Shiite mosque in Baghdad, this one in the western Harithiya neighborhood, killing 28 people.
No one immediately claimed responsibility for the two attacks but they bore the hallmarks of the al-Qaida-breakaway Sunni militant group known as the Islamic State, which has recently claimed several large bombings in the Iraqi capital, particularly in Shiite areas.
The IS says it has a foothold inside Baghdad but Iraqi officials deny this, though they acknowledged the militants likely have sleeper cells in the city.
In yesterday’s attack, the bomber detonated his explosives-laden vest as people were leaving the al-Khairat mosque in Baghdad’s Sinak commercial area following noon prayers, a police officer said. At least 28 people were wounded in the explosion, he said.
A medical official confirmed the casualty figures. Both officials spoke on condition of anonymity as they were not authorized to talk to media.
This summer, the Islamic State group captured large chunks of territory in western and northern Iraq, plunging the country into its worst crisis since the U.S. troops left at the end of 2011.

Iraqi officials say three car bombings in the revered Shiite shrine city of Karbala have killed at least 16 people. A police officer said yesterday that the explosives-laden cars were parked in commercial areas and parking lots near government offices. He says 41 others were wounded in the explosions. A medical official confirmed the casualty figures. Both officials spoke on condition of anonymity as they were not authorized to talk to media. Karbala is home to two revered Shiite saints and is located about 90 kilometers south of Baghdad.