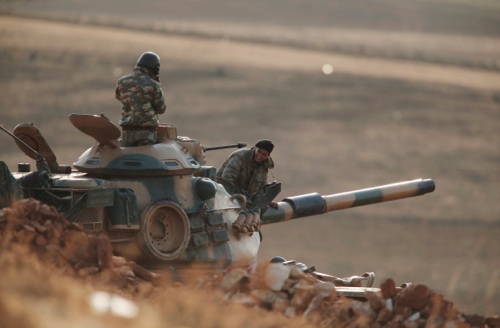 Turkish soldiers hold their positions with their tank on a hilltop on the outskirts of Suruc, at the Turkey-Syria border, overlooking Kobani, Syria

A Syrian Kurdish official called on the international community yesterday to allow weapons into the border town of Kobani, saying the town is still in danger from Islamic State militants.
Idriss Nassan, deputy head of Kobani’s foreign relations committee, said the Islamic State group can bring in reinforcements and weapons at any time and endanger the town near Turkey. He said airstrikes by the U.S.-led coalition are “effective” but not enough to defeat the jihadis.
Nassan’s comments came a day after the Pentagon spokesman said Kobani remains under threat of falling to the Islamic State fighters. Rear Adm. John Kirby said two weeks of airstrikes have killed hundreds of Islamic State fighters, and have stiffened Kobani’s defenders.
The Islamic State group launched its offensive on Kobani in mid-September, capturing dozens of nearby Kurdish villages and a third of the town in lightning advances that sent massive waves of civilians fleeing across the border into Turkey.
The Britain-based Syrian Observatory for Human Rights said the death toll since the Islamic State offensive began has reached more than 660. It said the dead include 20 civilians, 258 Kurdish fighters, 374 jihadi fighters and nine Syrian rebels who are fighting on the Kurds’ side.
The Observatory and Nassan reported sporadic clashes in Kobani yesterday as well as sniper fire on the eastern and southeastern edge of the town.
“From the start we said the coalition’s airstrikes will not be able to save Kobani or to defeat Daesh in the area,” Nassan said by telephone, using an Arabic acronym to refer to the Islamic State group. “We call upon the international community to open a humanitarian safe passage to allow in food, medicine, and weapons supplies.”
“Kobani is not fighting for itself alone. Kobani is fighting for the world community. This is a battle against terrorism and therefore all world countries are asked to participate in this resistance,” he said.
Bolstered by intensified U.S.-led coalition airstrikes targeting the Islamic State group, Kurdish militiamen were able to regain some of the positions they lost over the past few days. Lefteris Pitarakis, Mursitpinar , AP