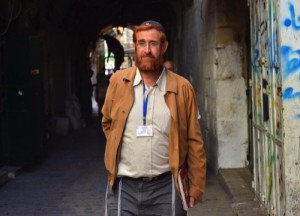 This photo made on Nov. 10, 2013 shows hardline Jewish activist Yehuda Glick walking in a street in Jerusalem

A Palestinian man suspected in the shooting of a prominent Jewish nationalist in Jerusalem was killed by police officers during an overnight arrest raid, Israel police said.
The suspect died in a gunbattle with officers, police said by text message. He was tracked down in an apartment minutes away from the scene of Wednesday’s attack.
Late Wednesday a man on a motorcycle shot and wounded Yehuda Glick, who heads a group that advocates Jewish prayer on the Jerusalem shrine known to Jews as Temple Mount and to Arabs as Haram Sharif. The hilltop compound has seen repeated clashes over the past few months between Palestinians and Israeli security officers, and was closed to all visitors indefinitely after the assassination attempt, police said.
The suspect, Muatanz Hijazi, had served time in Israeli jails for security offenses and was linked with the Islamic Jihad militant group, police said. The motorcycle at Hijazi’s home was identified as the one used in the shooting.
“The assassination attempt on Yehuda Glick is another grave phase in the ongoing Palestinian incitement against Jews and the state of Israel,” Israeli Defense Minister Moshe Ya’alon said in an e-mailed statement. Ya’alon accused Palestinian President Mahmoud Abbas of “spreading lies and hate against the right of Jews to their land and freedom of worship.”
Abbas yesterday blamed Israel “for the dangerous escalation” in Jerusalem, and his spokesman, Nabil Abu Rudeina, said the “Israeli aggression” is “tantamount to a declaration of war on the Palestinian people and their holy sites,” according to a statement on the official Wafa news agency.
Violence in Arab areas of Jerusalem has persisted for months, and the volatility threatens to plunge the city into a whorl of deadly confrontations. Jerusalem lies at the heart of the Israeli-Palestinian conflict, with both sides claiming the eastern sector, captured by Israel in the 1967 Mideast war and home to Muslim, Jewish and Christian shrines, for their capitals.
Palestinian leaders say the attacks are being driven by the failure of peace efforts, Jewish settlement of homes in the city’s Arab neighborhoods, and efforts by some Israeli legislators to allow Jewish prayer at the hilltop complex, which was prohibited after Israel captured it.
The United Nations Security Council Wednesday held an emergency session to discuss the tensions in the city, in response to a Palestinian request. The UN doesn’t recognize Israel’s annexation of east Jerusalem, captured by the Jewish state in the 1967 Mideast war along with the West Bank and Gaza Strip. Israel withdrew settlers and soldiers from Gaza in 2005. Calev Ben-David, Bloomberg

Sweden’s new government yesterday recognized a Palestinian state at a time of increased tensions between Arabs and Jews over Israel’s plans to build about 1,000 housing units in east Jerusalem.
The EU member country joined only two other Western European countries — Malta and Cyprus — that have officially recognized a Palestinian state.
Foreign Minister Margot Wallstrom said the Scandinavian country had decided on the move because the criteria of international law required for such recognition had been fulfilled.
“There is a territory, a people and government,” she told reporters in Stockholm.
Wallstrom said she hopes Sweden’s “excellent cooperation (with Israel) would continue” nevertheless and that the decision would be met in Jerusalem “in a constructive way.”
Israel was quick to condemn Sweden’s move, however.
The 28-nation European Union has said it would recognize a Palestinian state “when appropriate,” and has urged that negotiations to achieve a two-state solution be resumed as soon as possible.
In a symbolic move, British lawmakers earlier this month voted in favor of recognizing Palestine as a state.