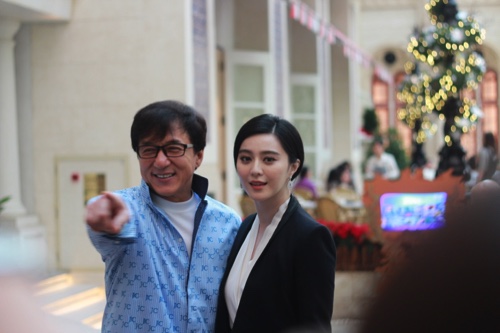 Part of the action-comedy film Skiptrace is being shot in Macau, featuring Hong Kong’s Jackie Chan, Chinese actress Fan Bingbing and American actor Johnny Knoxville, who shot to fame as one of the creators of reality stunt show Jackass. The Times was at the filming location yesterday and took part in an interview with director Renny Harlin (“Die Hard 2” and “The Legend of Hercules”) and some of the main cast members.
During a break from American-Chinese production shoots at MGM’s Grande Praça, Jackie Chan – who, besides his acting role, wrote the original story – explained why Macau was chosen to be part of the action. In the movie he plays a Hong Kong detective who buddies up with a gambler (played by Johnny Knoxville), “a cheater blacklisted all over the world except Macau,” Chan said.
Jackie Chan’s interest in Macau goes a long way back. He recalls how the city changed when he first came here to film, 35 or 40 years ago. “I knew Macau so well when it had only one casino. Today it’s totally different.”
The actor also noted the difference in procedure between American and Chinese film productions. “In America there are so many rules, you know, the actor cannot touch the table, you cannot do this, you cannot do that because those are the rules (…) In China it’s a bit different.”
Finnish director Renny Harlin has become a regular in big Hollywood productions, but has never visited Macau before. He said that Jackie Chan sparked his curiosity for Macau. “When I met Jackie the first thing he was talking about was Macau. I had never been to Macau and he said ‘you have to see Macau, it’s so fantastic.’ And he also said that we have to make a big important part of the movie take place in Macau because the rest of the world should see what a great place it is. That’s why we are here, just because he loves this place. And now I know why he loves it so much. It’s so beautiful.”
After the start of the shoot, Mr Harlin even said that “Macau is a dream place to work in” and enumerated to journalists some of the conveniences he found: “It’s so nice because it’s small, because literally I can go to my shoot from my room with an elevator or just across the street. In some other places we have been shooting we have to drive for hours to get to where we want to get.”
“I’m so lucky and glad to be one of the first directors to make a true American-Chinese co-production and it has been a fantastic experience. In the past it has been common that when Americans come to China they bring most of the crew with them, [in some cases] they bring 150 people with them. I know quite a bit about the Chinese movie industry and Chinese films and love them. So I decided, when I come here I’m going to use all Chinese crew. Everybody in our crew is either from China, Hong Kong or Macau. It’s been an incredible collaboration and I look forward to many more after this,” he said. Commenting on local film talent, the director revealed the production hired “a lot of people from Macau, and it has been smooth, pleasant and professional.”

Actress Fan Bingbing is a household name in China, having topped the Forbes China Celebrity 100 list in 2013 and 2014. Asked if she thinks that the fans react to her differently in Hong Kong and Macau compared to China, she admitted that she is better known in mainland China. “In Hong Kong there are people who know me as well. As for Macau, every time when I shoot films in Hong Kong, there would always be some shots taken in Macau. Therefore, I actually really like the food in Macau, like the egg tart and many other delicious foods,” she said.
The shoots in Macau will be mainly concentrated at MGM but other locations are possible. “It’s a secret,” joked Jackie Chan.  The movie is expected for release at the end of 2015 and, according to information provided by MGM, the shooting will continue in Macau for at least a week.

First announced in May 2013, Skiptrace is a Sino-American co-production which began shooting two months ago, on September 3. It tells the story of a Hong Kong detective, played by Jackie Chan, who embarks on an adventure to save his young niece Bai (Fan Bingbing). To do so, he races against the clock through places like Macau, Siberia, Inner Mongolia and the dunes of the Gobi Desert.