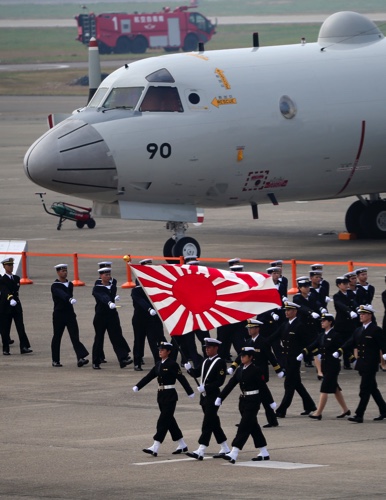 Japan’s Cabinet approved the country’s largest ever defense budget yesterday, including plans to buy surveillance aircraft, drones and F-35 fighter jets to help counter China’s rising assertiveness in the region.
Prime Minister Shinzo Abe’s Cabinet endorsed a nearly 5 trillion yen (USD42 billion) defense budget for the year beginning in April as part of a record 96.3 trillion yen ($814 billion) total budget.
The budget must still be approved by parliament, but Abe’s coalition holds majorities in both houses.
The 2 percent rise in defense spending is the third annual increase under Abe, who took office in December 2012 and ended 11 straight years of defense budget cuts.
The increase mainly covers new equipment, including P-1 surveillance aircraft, F-35 fighter jets and amphibious vehicles for a new unit similar to the U.S. Marine Corps. The aim is to boost Japan’s capacity to defend uninhabited islands in the East China Sea that it controls but which are also claimed by China.
The 2015 budget also covers the cost of purchasing parts of “Global Hawk” drones, planned for deployment in 2019, two Aegis radar-equipped destroyers and missile defense system development with Washington.
Abe favors a stronger role for Japan’s military, despite a commitment to pacifism enshrined in the U.S.-inspired constitution drawn up after the country’s defeat in World War II. Japan’s defense guidelines were revised in December 2013 as tensions rose over the East China Sea islands.
Chinese patrol boats often visit waters near the islands, which are known as the Senkakus in Japan and as the Diaoyu islands in China.
China has been stepping up military spending, which rose 12.2 percent to $132 billion last year, second only to the U.S. It also has a large and sophisticated defense industry.
Japan, meanwhile, is seeking to build up its defense industries with an eye toward the global market.
The defense budget is designed to achieve “seamless and mobile” defense capability that can respond to various contingencies, the ministry said in the Cabinet-approved budget plan. It will provide effective deterrence and contribute to stability in the Asia-Pacific region and improvement of the global security environment, the ministry said. Mari Yamaguchi and Elaine Kurtenbach, Tokyo , AP