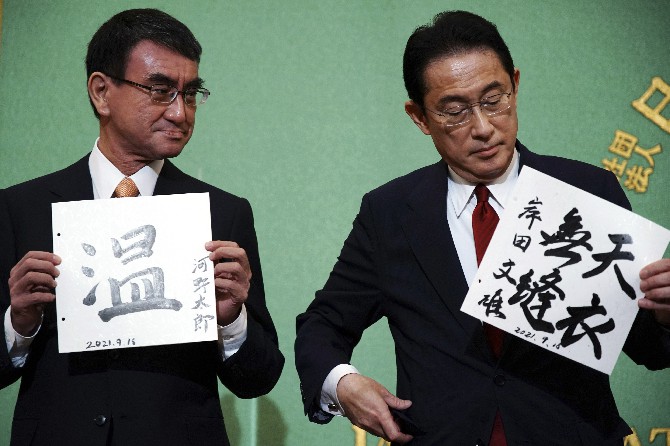 The stakes are high as Japanese governing party members vote today for four candidates seeking to replace Yoshihide Suga as prime minister. The next leader must address a pandemic-battered economy, a newly empowered military operating in a dangerous neighborhood, crucial ties with an inward-focused ally, Washington, and tense security standoffs with an emboldened China and its ally North Korea.
For the long-governing Liberal Democratic Party that often chooses its leaders in backroom negotiations, this election promises to be wide open. Because of the party’s control of parliament, its leader will become prime minister.
Whoever wins, the party desperately needs new ideas to quickly turn around plunging public support ahead of lower house elections coming within two months, observers say.
Unusually, two women — conservative Sanae Takaichi and more liberal Seiko Noda — are competing against front-running Taro Kono, the vaccinations minister, and former Foreign Minister Fumio Kishida.
Takaichi, with the crucial backing of Suga’s predecessor, former Prime Minister Shinzo Abe, whose conservative vision and revisionist stance she supports, has risen fast, while Noda’s chances are fading.
Abe’s backing of Takaichi may be an attempt to improve the party’s sexist image and divert votes from Kono, considered something of a maverick and a reformist, political watchers say.
Little change is expected in key diplomatic and security policies under the new leader, said Yu Uchiyama, a political science professor at the University of Tokyo.
All of the candidates support close Japan-U.S. security ties and partnerships with other like-minded democracies in Asia and Europe, in part as a way to counter China’s growing influence.
Kono and Kishida are former top diplomats. They and Noda have stressed the need for dialogue with China as an important neighbor and trade partner. All four candidates support maintaining close “practical ties” with Taiwan.
At a series of policy debates, the four candidates discussed diplomacy, the economy, energy and defense issues, but also gender equality and sexual diversity, which the male-dominated conservative party has rarely discussed in the past.
Inclusion of gender and diversity signals that the party knows it cannot keep neglecting the issues, said Ryosuke Nishida, a sociology and public policy professor at the Tokyo Institute of Technology.
Takaichi alone opposes changing a law that forces married couples to use only one surname — almost always the husband’s. She also has vowed to make official visits to Yasukuni Shrine, which honors World War II dead, including war criminals, and is considered by many in China and the Koreas as proof of Japan’s lack of remorse over its wartime actions.
The other candidates are likely to refrain from visiting Yasukuni because of the fallout in relations with China and South Korea.
Support for Suga’s government nosedived over his handling of the coronavirus and his insistence on hosting the Tokyo Olympics during the pandemic. Part of his loss of support has also been linked by analysts to the party’s sense of complacency and increasingly high-handed approach forged during Abe’s long years of leadership.
Wednesday’s vote is seen as a test of whether the party can move out of Abe’s shadow. His influence in government and party affairs has largely muzzled diverse views and steadily shifted the party to the right, experts say.
“What’s at stake is the state of democracy in Japan, and if or how the new leader is willing to listen to the people’s voices and take them into political consideration,” Uchiyama said. “Prime Minister Suga obviously had a problem with communicating with the people and did not provide accountability.”
Unlike the previous vote, when Suga’s selection was largely a done-deal orchestrated by party leaders, the vote on Wednesday is more unpredictable, with most factions allowing free voting by their member lawmakers, a rare move for the party.
Many general voters are watching the party vote, and governing party lawmakers in turn are paying close attention to public opinion in their quest to be re-elected in the upcoming parliamentary election.
The party vote could end an era of unusual political stability — despite corruption scandals and strained security ties with China and the Koreas — and bring a return to Japan’s “revolving door” leadership by short-lived prime ministers, starting with Suga.
Suga is leaving only a year after taking office as a pinch hitter for Abe, who suddenly resigned over health problems, ending his nearly eight-year leadership, the longest in Japan’s constitutional history.
Support ratings for Suga and his government have slightly recovered since his resignation announcement in early September, when virus infections also started to slow. The number of new daily cases dropped to 2,129 on Sunday, about one-tenth the level in mid-August. Japan has recorded about 1.69 million cases and 17,500 deaths.
Much of the sharp drop in cases is attributed to vaccination progress; about 56% of the country has now been fully vaccinated.
The government is expected to lift a monthslong coronavirus state of emergency on Sept. 30, and people look forward to returning to their daily lives. Opposition parties, meanwhile, have not been able to position themselves as vehicles for viable change.
“Many people tend to react to issues that directly affect their daily lives but pay little attention to political views and issues like national security,” Nishida said. “Once the infections slow, virus fears will fade quickly and even the Olympics will be remembered favorably.” MARI YAMAGUCHI, TOKYO, MDT/AP