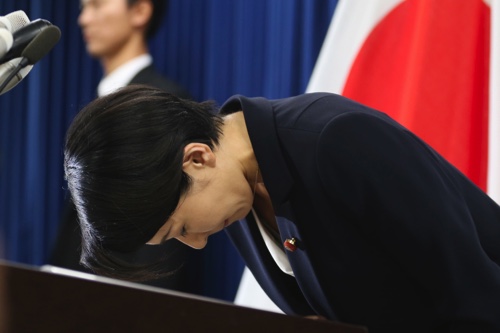 Japan’s trade and justice ministers resigned yesterday after allegations they misused campaign funds in the biggest setback so far for Prime Minister Shinzo Abe’s conservative administration.
The two ministers were among five women Abe named to his Cabinet in a reshuffle early last month. Their resignations may help to control the damage to his relatively high popularity ratings, but are a blow to efforts to promote women in politics and business as part of economic revival policies.
Yuko Obuchi, daughter of a former prime minister and a rising star in the ruling Liberal Democratic Party, resigned early yesterday as trade minister, saying she needed to focus on an investigation into discrepancies in accounting for election funds. She did not acknowledge any wrongdoing.
Justice Minister Midori Matsushima resigned after the opposition Democratic Party of Japan filed a criminal complaint against her over distribution of hand-held fans or “uchiwa.” Matsushima also faces complaints over using parliament-provided housing while keeping security guards at her private residence in downtown Tokyo.
Speaking to reporters shortly after he accepted Matsushima’s resignation, a somber Abe told reporters he was also responsible because he appointed the two women to his Cabinet.
“I deeply apologize to the public,” Abe said.
Within hours, Abe named replacements, choosing Yoichi Miyazawa, 64, a former finance ministry official as trade minister. Miyazawa, from Hiroshima, served as a secretary years ago to his uncle, former Prime Minister Kiichi Miyazawa.
Abe chose Yoko Kamikawa, 61, a female lawmaker who has worked on demographic issues, as the new justice minister.
Abe’s first term in office, in 2006-2007, was marred by gaffes and resignations by his Cabinet ministers and he stepped down, citing ill health. His current term has been smoother, particularly in the first year as the stock market soared along with his popularity ratings.
Pressure for faster action on economic reforms has risen, however, as the recovery faltered following a 3 percentage point increase in the sales tax in April. Mari Yamaguchi and  Elaine Kurtenbach, Tokyo , AP