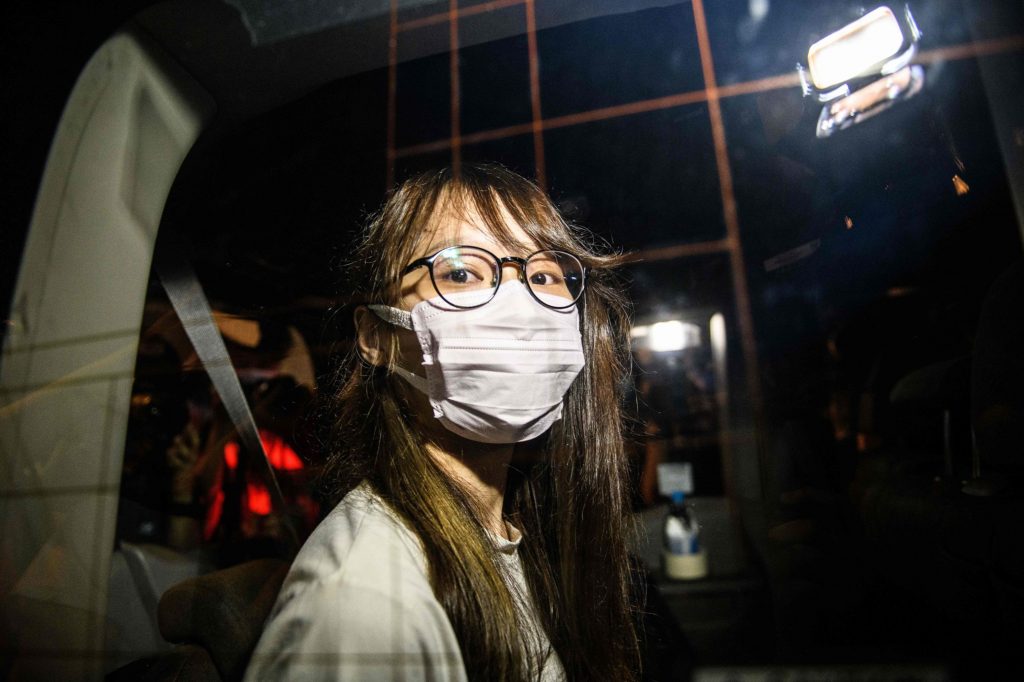 Agnes Chow looks out of a car window while being driven away by police from her home following arrest under the new national security law in Hong Kong, on Aug. 10. (Vernon Yuen/AFP/Getty Images)

While the world focuses on the detention of Hong Kong media mogul Jimmy Lai, it’s the plight of 23-year-old activist Agnes Chow that has made the battle over human rights in the city personal for many in Japan.

Chow, a Japanese speaker who helped galvanize support for the pro-democracy movement, has been dubbed “the goddess of democracy” by local media, in a reference to a statue created by protesters at Tiananmen Square.

The activist’s arrest was front page news in local papers today (Tuesday) and the hashtag #FreeAgnes trended on Japanese Twitter. TV showed a masked and bespectacled Chow being pushed into a van and driven away in the dark.

Chow’s detention could prove a further blow to ties between the two countries. Beijing’s clampdown on Hong Kong, as well as China’s ratcheting up of tensions around disputed East China Sea islands and its standoff with the U.S., had already shaken the relationship between Asia’s two largest economies.

In a sign of unity across the political spectrum over the issue, Japanese Communist Party leader Kazuo Shii tweeted a call for Chow’s immediate release.

When asked about the arrests, Chief Cabinet Secretary Yoshihide Suga reiterated that the government was extremely concerned about the situation in Hong Kong. Chinese Foreign Ministry spokesman Zhao Lijian told a briefing that Hong Kong affairs are purely China’s internal affairs and Tokyo should stop interfering.

While Tokyo has been relatively cautious about criticizing the country’s biggest trading partner, lawmakers have been more outspoken, with some in the right-leaning LDP seeking to cancel a state visit by President Xi Jinping following China’s clampdown on Hong Kong.

Chow’s Japanese-language Twitter account has not been updated since June 30, when she announced she was leaving pro-democracy organization Demosisto. She ended her final post with the words: “While we’re alive, there’s hope.”