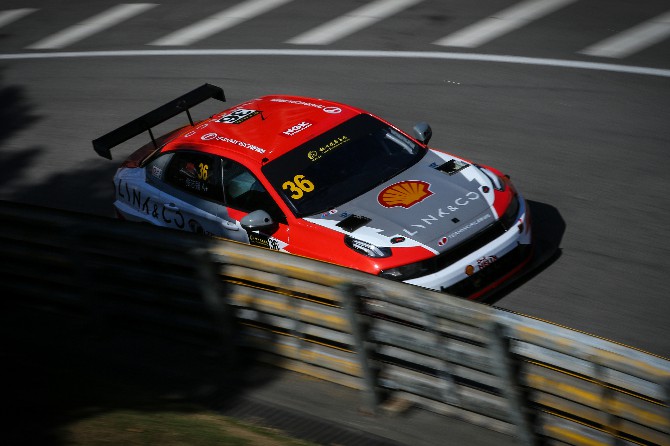 Jason Zhang Zhi Qiang won the TCR Asia driver’s title this year after an outstanding performance over the weekend in Macau.
Although the Shell Teamwork Motorsport Lynk&Co driver was on the verge of being crowned champion ahead of the Macau season finale, Zhang did not take the title for granted. He gave his best performance around the Guia circuit, taking the win in the final race on Sunday ahead of teammate Ma Qin Hua.
Zhang scored brilliantly on Saturday in Race 1 in taking second position behind Ma, who was on a near impossible mission to snatch the crown from Zhang.
But Lady Luck was not on Ma’s side despite his great efforts on day one, when he continuously made the best lap times around Guia. This earned him pole position for Race 1, followed by a victory in the same race, and the best starting spot in the grid for Sunday’s final 12-lap race.
In the end, Zhang said he had mixed feelings about the weekend. While very happy about his Race 2 and TCR Asia championship wins, he expressed sympathy with Ma’s bad luck only taking third place in Race 2 after a tire puncture forced him to slow down and give way to Lo Sze Ho in the Hyundai i30N.
Zhang, Ma, Lo, Sunny Wong (another Lynk&Co driver) and local driver Filipe Souza were in a race of their own, with all the other drivers finding matching their pace difficult.
Souza finished fourth in Race 1 and had also been fighting for a place on the podium in the final race. He was, however, surprised at the entrance with the black flag, signifying his disqualification from the final race. According to the information provided, he was disqualified for jumping the start, an unusual decision in its timing and a very rare move from race control. In such cases, the driver would usually be penalized on time, with penalty seconds added to the final race time. If it happens during a race, the driver may be called on to drive through the pit lane at slow speed, adding time and potentially costing race positions.
In the press conference following the race, Zhang said he was happy to win the TCR Asia category as a Chinese driver in a Chinese car, expressing his hope the same could happen in the TCR International Series and other worldwide championships.