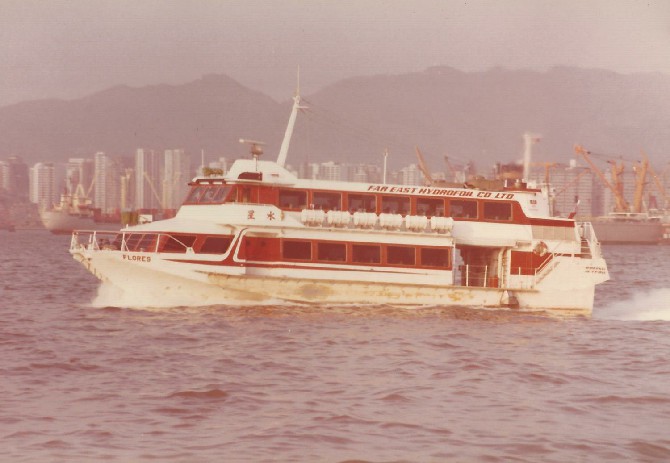 The Jetfoil Conservation Concern Group has recently provided three proposals to stakeholders in attempt to save the world’s first Jetfoil from being dissembled, the group announced in a recent statement.
Macau and Hong Kong residents should be familiar with the name Jetfoil, as it has run on the sea between the two cities for 45 years. The type of vessel was invented and manufactured by aircraft manufacturer Boeing as a result of a commercialization plan of military hydrofoils in 1972.
The first Jetfoil in the world, known as Jetfoil One, or Flores in Macau and Hong Kong, was launched in 1974. After its showcase mission, Jetfoil One served briefly in Hawaii in America, before being acquired by the late Dr Stanley Ho in 1978 as part of his Far East Hydrofoils Co., Ltd., the predecessor of TurboJet. Flores was retired in 2008 and has been stored in a Hong Kong shipyard since then.
The three proposals are named the Macau Barra Plan, the Macau Lai Chi Vun Plan and the Hong Kong Central and Western District Plan.
The first plan aims to integrate the ship with the Macau Maritime Museum and the A-Ma Temple in order to create a more developed tourism offering in the area. “We believe that if Flores [is placed near Barra], it will […] connect A-Ma Temple, the museum and the art centers as an integrated tourist attraction,” the group explained in a statement.
The second plan aims to make use of the vision the government outlined in the Master Urban Plan and the Cultural Affairs Bureau, to transform the Lai Chi Vun old shipbuilding facilities into a cultural district.
The group recommends the government place Flores at the site of the old Macau Palace Casino alongside Patane, to enrich the relics displayed at the future cultural district.
On this, at an Executive Council Press Conference last week, the Secretary for Administration and Justice, André Cheong, disclosed that he had no clear answer to the public on the matter. However, he added that to his knowledge, the Marine and Water Bureau, which is not within his authority, has been taking the matter seriously and following up the proposal.
The third proposal that the group made suggests authorities in Hong Kong place the ship in the Central and Western District Promenade between Sheung Wan and Kennedy Town.
On October 15, the Central and Western District Council of Hong Kong passed a motion to request that the Hong Kong government coordinate with other entities for the preservation of the hydrofoil.
Weeks ago, concerns over the suspected disassembly of the ship were raised. The group called on the public to protest to TurboJet and managed to call off the suspected disassembly.