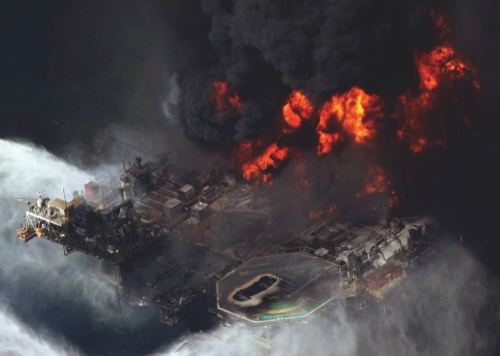 In this April 21, 2010 file aerial photo taken in the Gulf of Mexico, the Deepwater Horizon oil rig is seen burning

A federal judge in New Orleans stuck to his ruling that said BP’s conduct in the 2010 Gulf of Mexico oil rig disaster amounted to “gross negligence.”
U.S. District Judge Carl Barbier said last week there was no basis for BP’s claim that the testimony was unfair or prejudicial and rejected BP’s call to either amend his Sept. 4 judgment or hold a new trial on the issue. The ruling could mean close to USD18 billion in federal penalties for the oil giant.
BP spokesman Geoff Morrell said the company disagrees with Barbier’s decision and will appeal the September ruling..
BP attorneys filed a motion in October arguing that a key finding that led to the “gross negligence” ruling was based on testimony about cement used to seal the completed Macondo before the April 2010 explosion of the Deepwater Horizon drilling rig. BP asserted that the testimony from Gene Beck, an expert for cement contractor Halliburton, had been excluded from a trial on the issue.
“Initially, it requires some effort to identify exactly what testimony is the target of BP’s motion,” Barbier wrote in an 11-page ruling that included excerpts from the testimony. He said some testimony was excluded. However, he said, some critical testimony was elicited by BP’s attorneys on cross examination.
“Even assuming that the complained-of testimony was excluded during direct examination, BP’s own counsel later opened the door to this testimony,” Barbier wrote.
The Deepwater Horizon rig exploded on April 20, 2010, killing 11 workers and spewing millions of gallons into the Gulf of Mexico for months. BP leased the rig from Transocean Ltd.
Barbier has scheduled a January trial to determine how much in Clean Water Act fines BP will face.
Under the Clean Water Act, a polluter can be forced to pay a maximum of either $1,100 or $4,300 per barrel of spilled oil. The higher limit applies if the company is found grossly negligent — as BP was in Barbier’s ruling. But penalties can be assessed at lower amounts.
Government experts estimated that 4.2 million barrels spilled into the Gulf. BP urged Barbier to use an estimate of 2.45 million barrels in calculating any Clean Water Act penalties. Kevin McGill, New Orleans , AP